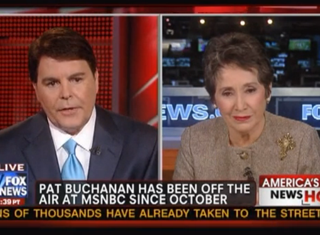 Earlier in the week, it was reported that Pat Buchanan would be indefinitely removed from MSNBC, in part due to some of the offensive racial and ethnic comments in his latest book. Not everyone was comfortable with this decision, as Fox News commentator Liz Trotta vehemently proved today, in a talk about how Buchanan’s suspension was “absurd” and a product of the “close to communist” MSNBC network.

Trotta discussed the matter with anchor Gregg Jarrett, beginning by declaring Buchanan a “victim of the hard left,” and attacking MSNBC President Phil Griffin for saying Buchanan’s book wasn’t “appropriate” for the network. “When has he put himself in charge of being an arbiter of free speech in this country?” she asked, adding that Buchanan had “been assailed mercilessly by the homosexual lobby” and assorted other liberal groups.

Jarrett replied that he did not exactly see the relevance of the First Amendment, given that MSNBC was a private corporation that could impose the standards it desired on its employees. “I know better than to get into a discussion with a lawyer such as yourself,” Trotta laughed, and read an excerpt from Suicide of a Superpower. “Presidential candidate, liked by just about everybody, this is absurd,” she complained. Jarrett noted that in the excerpts he had read, Buchanan “does appear to lament the browning of America.” “You can see how that would be offensive,” he replied. “No, those are facts!” Trotta replied.

Jarrett then seemed to sympathize a bit more with Trotta on one point: that MSNBC had a double standard of what constitutes offensive dialogue. “Al Sharpton‘s rhetoric and past deeds have been called racist,” he noted, suggesting that black talent got a looser leash in terms of what they could discuss publicly than white talent. Trotta agreed, adding that only in a channel like MSNBC, which was “close to being a communist channel,” could Buchanan’s book be offensive.