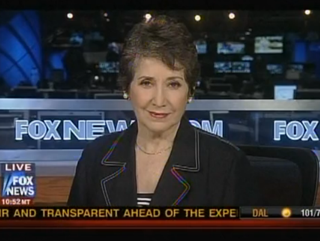 The Newsweek editorial predicting what life would be like for Princess Diana made many readers uneasy about resurrecting the dead, but for Fox News’ Liz Trotta, it was no surprise. During her Saturday commentary segment today, Trotta noted that “you can expect more of the same” from editor Tina Brown, who peddles in “the lowest of the low” and is “desperate” to sell her “pamphlet.”

Trotta, who appears every Saturday to give her (usually excoriating) take on a topic of the week, minced no words about Brown and her publication, calling it “the lowest of the low” and accusing Brown of resorting to “old Fleet Street desperate tricks in order to up the circulation.” She also remarked that her piece on Diana was just “fan fiction” and that “you can expect more of the same, because wherever Tina Brown goes, she leaves a trail of third class ‘journalism’ behind her.” She then gave her anti-plug for the magazine: “unless you’re really interested in sleaze, you should not buy Newsweek.”

The Saturday afternoon Liz Trotta commentaries that have become Fox News staples are fascinating for many reasons– for one, there’s never one where Trotta isn’t unapologetically frothing at the mouth about someone in the media, and she rarely has dialogue with the host of the hour (though there was more of that today). What’s more, they are never actually part of any program. Trotta just appears, barely announced, rarely expected, introduced by a news anchor as if cutting to another report or commercial. And the format, while uncommon, fits Trotta’s “if you’ve got nothing nice to say, keep talking” style to a T.

Trotta’s scathing words for Tina Brown and Newsweek below: