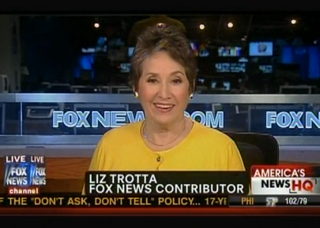 Those looking for fodder with which to label Florida Republican Rep. Allen West sexist, the most recent of which being his email rant to DNC Chair Rep. Debbie Wasserman-Schultz calling her “vile” and “not a lady” (though his misunderstanding of the lives of Spartan women is definitely up there). In her weekend commentary today, however, Fox News contributor Liz Trotta avoided the usual gripes, instead bringing up the unusual complaint that being a “big biker” have led some to call him “anti-women.”

“It must be that the heat has gotten to everybody in Washington,” Trotta joked, explaining the current scuffle between the two Congresspeople, for which neither has made a move to bury the hatchet yet. It all began, explained Trotta, with “a Congresswoman from Florida, a Democrat, Debbie Schultz-Wasserman [ed. note– close enough], whose talking about her fellow Rep. Allen West, a Republican,” got her in trouble. She joked that his response that she was “not a lady” had a “quaint, sort of Southern nature” about it, quoting a Washington Post blog describing it as something out of Jane Austen. She also laughed at the fact that both Representatives had “immediately used the material in the fight for fundraising, which is just terrific.”

Trotta finally got to the sexism claim after a quick reminder that these two have a history, given their neighboring constituencies and such. “Col. West is a big biker and writes a biking column for a magazine,” she noted, “and that was suggested as being anti-women.” Huh?

Turns out there is something to Trotta’s claim, though some explanation, instead of just throwing the biker claim out there, would have been a nice courtesy to the viewers. Via Time:

Wheels on the Road has used extreme language in discussing Wasserman Schultz. The July 2011 issue featured a rant about the congresswoman by a columnist named “Nasty,” who more than lived up to his name, calling the Democrat “Debbie Wasserman Shitz.” An October 2010 issue, in which West had an unrelated column, included a obscene tirade on Wasserman Shultz in which a contributor named Willie Woo asked readers to “imagine” intercourse with the congresswoman.

The magazine, which regularly shows women exposing their breasts, still displays a photo of West on its website and calls him a “contributor.” But West’s spokeswoman says he has not contributed to the magazine since he took office, and that when he did, his columns did not contain anything obscene.

So fear not, being a “biker” is not a new euphemism for hating women on its own. Trotta’s commentary via Fox News below: