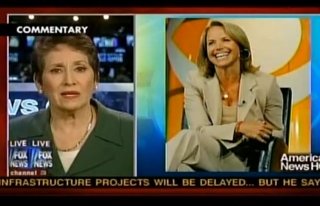 There’s at least one person in the media that is rejoicing over the news that Katie Couric is probably leaving her position at CBS: Fox News’ Liz Trotta, who gave a scathing commentary today claiming the perception of Couric is as a journalist is “ridiculous,” and that her failure proved that “there’s a very big difference between doing the news… and giggling all the time.”

Beginning her piece with what problems Couric faced to begin with, she noted “the most obvious one– she’s not a journalist and no one at CBS wanted to admit this.” It only got angrier from there. While she noted that, to Couric’s benefit, network news as a whole was in a decline, Couric’s departure particularly “really is such a bad signal,” as Couric was “not just symbolic of the failure of left-wing journalism… but what has really happened to network news.”

She returns several times to her main argument that Couric was not a journalist, laughing at the idea that Couric was currently reporting from Iraq. “She was good at infotainment,” she noted– by far her kindest assessment– and “the viewers simply didn’t believe her.” She culminated with her most vicious line of attack on Couric, tackling what she perceived to be a “giggling, grinning image with very little background” that did a disservice to women in journalism. “There’s a very, very big difference between doing the news, even if you’re a woman, and giggling all the time.”

The commentary via Fox News below: