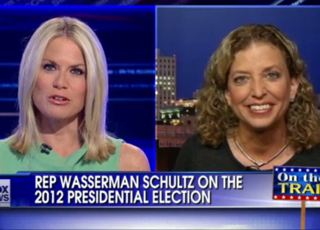 DNC Chairwoman Debbie Wasserman Schultz is on the front lines of President Obama’s campaign effort, and this week she went on Fox News to discuss how the campaign is going and what the path to reelection for the President is. Speaking to Martha MacCallum (filling in for Greta Van Susteren) on On the Record, MacCallum attempted to get Rep. Wasserman Schultz to let go of her talking points and answer how she really feels the campaign in Florida is going.

“Our grassroots, people powered campaign is the focus,” Rep. Wasserman Schultz noted, saying that the President had helped the economy slowly but surely and that his health care reform would help “seniors at drug store counters who have to leave 2-3 prescriptions behind.” She added she was confident in the President’s victory as he is “ahead of Romney in every poll,” and Romney continues to say things like “we shouldn’t do anything about housing, we should just let it hit rock bottom.”

MacCallum challenged her on this point, arguing that “there’s a lot of people who believe the things you are trying are not working,” and that while “I’ve heard a lot of these talking points,” solutions seem indirect. “These aren’t talking points, these are facts,” Rep. Wasserman Schultz replied. MacCallum noted that many independent voters are undecided, that moderates are looking elsewhere. “No, actually,” the Congresswoman replied, “Voters in the middle aren’t not so sure.”