Fox’s Martha MacCallum: Women Get Paid ‘Exactly What They’re Worth’ 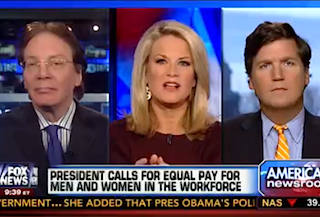 On Wednesday morning, Fox News invited two male commentators — Alan Colmes on the left, Tucker Carlson on the right — to discuss the portion of President Barack Obama’s State of the Union that addressed equal pay for women in the workplace. But it was the female host, Martha MacCallum, who made what may have been the most surprising comment on the issue.

Colmes was echoing Obama’s line about doing away with “workplace policies that belong in a Mad Men episode,” when Carlson shot back, “That’s just not true!” He asserted that women actually make more than men when you “adjust for time they take off for child-bearing.”

As the two men continued to shout back and forth, MacCallum ultimately jumped in to give her take on the matter. “I think most women do not want to be treated as sort of a special class of citizens, she said. “They want to go to work every day, they want to get paid for being a professional and for doing their job real well and they don’t want to be treated like some group of people who are given a special handout to make sure they’re okay.”

“Many women get paid exactly what they’re worth,” MacCallum asserted. When Colmes asked if that means they are not worth the same as men, she added, “They’re worth a heck of a lot.”

When Carlson repeated his claim that women are paid the same or more than men when you adjust for the “voluntary” time they take off as maternity leave, Colmes said, “Women get pregnant, men don’t. It is not voluntary.”