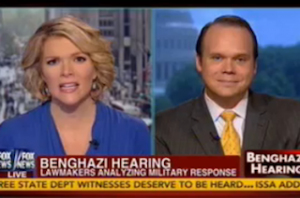 Following testimony from the Benghazi “whistleblowers” Wednesday, Fox News’ Megyn Kelly and her guest Chris Stirewalt tried to anticipate what the Obama administration’s reaction might be. According to Kelly, the diplomat witnesses went before the congressional committee and said, “we’re not political people. And the story is what the story is.”

Stirewalt said that the witnesses, particularly Gregory Hicks, have “acquitted” themselves well against potential attacks from Democrats who may want to discredit their testimony as partisan. “They have been calm. Their demeanor has been emotional at times, but they have been able to keep a clear narrative together and they’ve been able to describe this in a way that hasn’t been unwound by the Democratic talking points.” Stirewalt said he believes Democrats in Congress are pushing back on these witnesses because what they are saying is “potentially damaging to the current Democratic president and it’s also potentially very damaging to the woman who they would like to be the next Democratic president, Hillary Clinton.”

Kelly singled out the “dramatic” moment between Rep. Trey Gowdy (R-SC) and Hicks, in which the witness said he was “stunned” and “embarrassed” by U.N. Ambassador Susan Rice‘s infamous Sunday talk show appearances following the attack. “You tell me what does the administration do with that?” Kelly asked. “They just come and say he’s a jerk, he’s a liar, don’t believe a man who cried over the ambassador’s death? Are we supposed to say, that Hicks, he’s a partisan hack?”

Stirewalt predicted the Obama administration would try to paint Hicks as an “emotional” witness who didn’t have his facts straight. “They use the word ’emotional’ a lot to indicate maybe he’s not thinking so clearly.” He added, “But what Hicks is saying and what makes the testimony so damaging is the fact that there were options. He believed that there were options available to save lives or at least provide a definitive show of American strength, instead of saying to these Islamist militants that we would throw our hands up and allow Americans in a U.S. facility to be murdered without response.”