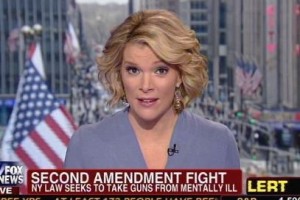 According to a report on Fox News Channel with host Megyn Kelly, the state of New York recently accessed an individual’s medical records and determined that they should be ineligible to possess a firearm. The state ordered that this individual surrender his weapons, which he did. However, as Kelly reported, the individual told to surrender his weapons was inaccurately identified as a threat. Today, that individual is suing the state, and a local government official in New York has said “we all look foolish.”

RELATED: Biden Rips Gun Control Opponents On MSNBC, Says Many Like Owning Guns Because ‘It’s Like Driving A Ferrari’

Kelly said that a new law, passed in New York in the wake of the Newtown massacre, requires mental health providers to notify government officials as well as gun licensers if they believe an individual is libel to hurt themselves or others. Those officials will then determine whether or not the individual in question should retain their gun permit.

One person has already been misidentified as a threat and had his firearms permit revoked. He was ordered to and complied with the mandate to surrender his firearms to the state.

“The letter that he got said that if he didn’t turn his guns in they were going to come to his house and get his guns” said Fox News reporter Trace Gallagher.

Gallagher reported that New York’s new gun law allows the government to use the privacy provisions within HIPAA, ensuring that the state has the right to “protect the public’s health and wellbeing,” as the legal justification to forcibly confiscate firearms from people determined to be a threat to themselves of others.

Gallagher said that no one turned this individual into the authorities, but that officials confiscated weapons from the wrong person. “[N]ow we all look foolish,” said an Erie County official in a press release.

Kelly reported that it was only after the individual retained counsel and sued the state did he find out that he was not the intended target of this particular firearms confiscation.