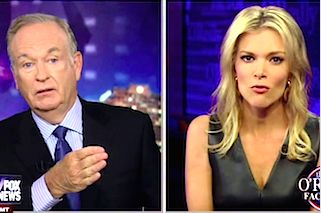 The cable news ratings for June are in and sitting atop the 25-54 demo list for the second time ever is Megyn Kelly. With an average of 400K demo viewers for the month of June, The Kelly File edged out perpetual frontrunner The O’Reilly Factor, which came in second with 397K. Fox’s Hannity placed third with 269K.

Bill O’Reilly maintained his top spot in total viewers, averaging 2.419M over the course of the month. Kelly was the only other cable news host to top the two million mark, coming in second place with 2.043M. In this category, The Five came in third with 1.857M total viewers.

For the month of June, Fox News held the top eight spots in the demo. Coming in at #9 was Anderson Cooper 360 with 201K, followed by CNN Tonight with Don Lemon at #10 with 197K.

Kelly’s demo victory marks the second time she has topped O’Reilly in the monthly ratings. The first came in November 2014, when the Ferguson grand jury decision and resultant protests took center stage, about one year after her show launched. This past month, her ratings got a boost from exclusive interviews with members of the 19 Kids and Counting family following the scandal surrounding Josh Duggar’s admission that he sexually molested his sisters when he was a teenager.