Fox’s Mike Huckabee: Biden Came Across As An ‘Obnoxious Drunk’ During Debate
video

Fox’s Mike Huckabee: Biden Came Across As An ‘Obnoxious Drunk’ During Debate 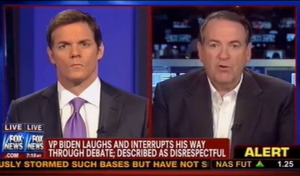 “I thought Joe Biden came across like a guy you meet at a cocktail party or some political event, an obnoxious drunk who’s loud and boisterous and interrupts every conversation,” Huckabee told Fox News’ Bill Hemmer. “He just is the kind of guy you want to get away from as quickly as you can, and go find someone else to talk to. It was just boorish behavior for the first half.”

I think somewhere during the debate, he took Ritalin and started calming down by the end. Not kind of thing that is very helpful to Joe Biden and his image with voters in the heartland of America who are taught to be polite. And he just wasn’t.

Noting parts of the country where people expect certain politeness, Huckabee said, “What you saw last night is the kind of behavior that’s a real turn-off to people who grew up being told that manners is as important as anything that you say or do.”

Huckabee further said he thought Biden was coached to portray his image as an “elder” — and to contrast that with Paul Ryan, making him look unprepared for primetime. The approach could have worked, he said, but Biden “overplayed it.”

Not putting all the blame on the moderator, Huckabee also said Ryan should have pushed back more. In response to Biden’s interruptions, he should have stopped, allowed a bit of silence, and asked Biden was what funny about issues such as a nuclear-armed Iran.

His only criticism of Martha Raddatz, Huckabee said, was that she interjected more often when Ryan was speaking, and more often pressed him for specifics.