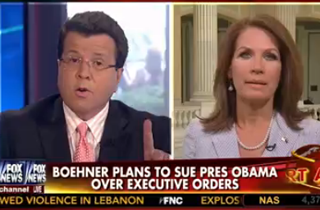 An exchange between Neil Cavuto and Rep. Michele Bachmann (R-MN) regarding a lawsuit filed by the House against the Obama administration grew so contentious, that the former cut to commercial in the midst of Bachmann furiously admonishing him.

While Bachmann was on Fox to defend the lawsuit, which claims that the administration has abused his powers via over-using executive privilege and wants to defund him, Cavuto exasperatedly pointed out that the timing of the lawsuit seemed too political to make sense. “You’ve been bemoaning it for a long time. Why now the suit?” he asked. “Why not just fix things that are very, very wrong now rather than dragging someone to court over whether they overstepped their bounds? It just seems to me like an enormous waste of effort.”

Eventually it devolved to the point where Cavuto abruptly took the program to a commercial break as Bachmann was in the middle of a loud denunciation of Cavuto.

When he returned, he apologized to Bachmann for accidentally cutting her off. “But I don’t apologize for my sentiment for the fact that we are wasting time filing lawsuits against one another,” he added. “These types of charades — and I’m sorry, that’s what I call them — are just that, charades.”