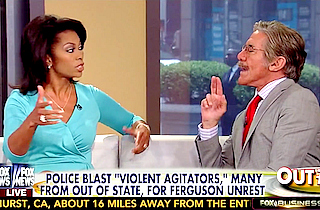 Geraldo Rivera wasted no time Tuesday afternoon lighting dynamite under an Outnumbered panel and setting the thing off. The fuse: his conviction that the indictment of Ferguson police officer Darren Wilson would be racially tinged, much like the trial of George Zimmerman.

“This is more than a racial issue,” she said. “For you to pick off the low-hanging fruit is offensive and it insights more of it to go on. It’s irresponsible.”

“People see things through the most egregious issue we have domestically, which is race,” Rivera replied. “They will choose sides based on race. I see it clear as day and to accuse me of being simplistic defies the reality of American justice.”

“I didn’t sit here to be helpful,” Rivera said over further objections. “I sat here to be truthful. Let me tell you one other thing about these thirty-one people that were arrested [last night]. How many really want justice for Michael Brown? When you’re looting a liquor store, are you really looting the liquor store for the sneaker store for justice? That is because these people are opportunists.”