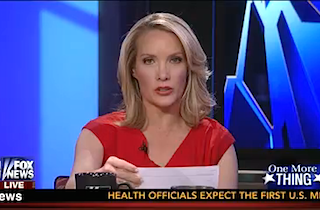 The Five’s Dana Perino has a “dare” for those local and national meteorologists scheduled to sit down with President Barack Obama today to discuss a new White House report on the effects of climate change: Ask him about Benghazi.

For her “One More Thing” Monday afternoon, Perino looked at a Wall Street Journal op-ed by Caleb Rossiter that argued Western government care more about climate change than improving the lives of people in places like Africa. “Why is this important?” she asked. “Tomorrow, President Obama is going to do interviews with meteorologists all across the country about a new climate change report. I hope they ask him about Benghazi.”

“Like, the weatherman from Montana should ask him about Benghazi,” she added. “That would be great. I dare you.”

Among those set to interview President Obama today are Al Roker, co-anchor of NBC’s Today show and Ginger Zee, meteorologist on ABC’s Good Morning America. Will either of them accept Perino’s dare?

Update — May 6, 5:30 p.m. ET: On Tuesday’s show, Perino addressed the backlash to her comments, saying she was just kidding “When I suggested that the weathermen ask the president a question about benghazi, I was joking,” she said. “So all of you people who have called me the most horrific words today, on the left, you can just relax, it was a joke.”