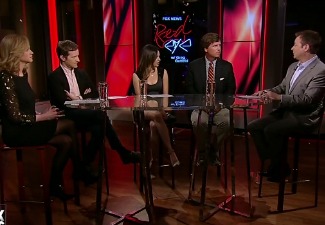 Red Eye, the only Fox News show specifically designed for insomniacs, took on the “phony” #CancelColbert campaign last night, all in agreement that the controversy is stupid and pointless, though Tucker Carlson said it was hard to take sides between the Twitter mob and a “sanctimonious tool posing as a comedian.” He said Stephen Colbert‘s schtick is portraying conservatives as racists and it’s “a one-joke show.”

Ellison Barber wondered what the endgame is exactly, because obviously Colbert’s not going to get canned because of this. Andy Levy said, “Twitter is a sinkhole filled with silly, silly people.”

Michael Moynihan lamented how Twitter’s become a forum for anyone to be angry at anything, calling the backlash a “great Stalinist response.” Carlson said that the point of Colbert’s bit is “people who disagree with me… are bigots,” which he believed was “as every bit as Stalinist as the calls to get him fired.” Joanne Nosuchinsky asked how in the world anyone was compelled to apologize before Twitter showed up.

Levy agreed it was “willful stupidity” fueling the Twitter outrage, but couldn’t resist taking a shot at Colbert, mockingly saying it must suck for someone’s sarcasm to be taken out of context, then playing the clip of Colbert taking their mockery of President Obama out of context.