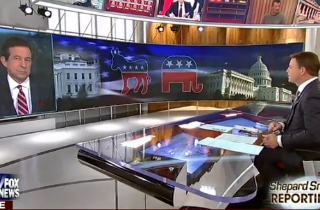 In the White House’s decision to send more troops to Iraq, Fox’s Chris Wallace and Shepard Smith both detect the slow creep of another Vietnam-like conflict.

Discussing President Barack Obama‘s decision Friday to deploy more 1,500 soldiers to assist the Iraqi security forces, the Fox News pair openly expressed skepticism of the plan, calling out the administration for contradicting prior statements on whether it would send “boots on the ground.”

“I don’t want to overstate,” Wallace said, “but I’ve got to say: For those of us who are old enough to have lived through it, this does have a little bit of the scent of Vietnam.”

“It absolutely does,” said Smith.

“We remember back in the early ’60s when President Kennedy sent in a few hundred advisers and then it was a few thousand and then it ended up being 15,000,” Wallace explained. “We know how that ended up. Not saying this is going to end up the same way, but now as we’re doubling from a few hundred, then it was 1,500, now it’s going to be 3,000, it does have the scent of Vietnam about it.”

After Wallace noted that some military officials have pushed back on the decision, asking for clarification on the goals “because there is this sense of the president announced a mission more by what he wasn’t going to do than what he was going to do, and now it’s slightly mission creep, whatever you want to call it.” He added of the president’s decisions: “It just seems to be half-step after half-step.”

And that led Smith to rail against the way this combat has progressed [emphasis added]:

Anybody who didn’t see this coming, I don’t understand it. The president said — whether this is true or not is another matter — but the president said the goal is to degrade and eventually destroy ISIS, and at the same time said there is no military solution, and the only way you can even begin to do it is by putting ground troops on the ground, but we’re not putting ground troops on the ground. So you state a goal that is absolutely one-hundred percent unachievable, given the parameters that you’ve laid out. That’s asinine. It’s unbelievable.