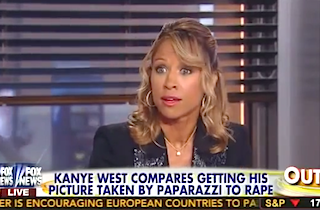 Over the weekend, Kanye West debuted 20 brand new songs during a concert in London. But it was one comment he made between songs that has gotten the most attention. Though no video cameras were allowed inside, those in attendance reported that at one point the rapper compared facing the paparazzi to being “raped.”

On Tuesday, Fox News’ Outnumbered took on West’s comments, placing them in the larger context of Hollywood actors like Charlize Theron and Gwyneth Paltrow who have made similarly insensitive comments about the perils of fame. “What is wrong with these people?” co-host Sandra Smith asked.

As the show’s resident Hollywood representative, Stacey Dash reacted a bit more strongly than the rest of the panel. “For Kanye to say ‘rape,’ maybe he needs to spend some time on Rikers Island, go to Rikers for a while, and then he’ll know what rape is.” She then defended the paparazzi as “just doing their job.”

Later in the discussion, Dash had some advice for West. “If you’re nice, if you’re polite to them, they leave you alone,” she said. “It’s when you start to call them names and act crazy and put your hands up and do all this drama that they make it a big deal.”

West was already a prime target for paparazzi before he married Kim Kardashian, but now it has inevitably reached a whole new level. But as Dash points out, that doesn’t mean he knows what it feels like to be raped.