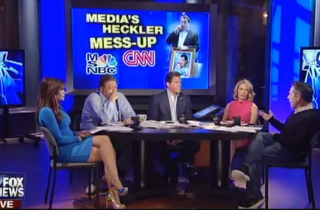 This afternoon, Fox’s The Five tore into MSNBC and other media outlets who edited footage of gun advocates “heckling” the father of a Sandy Hook victim while he testified before the Connecticut legislature.

As this writer noted earlier today, the full tape of the incident shows gun advocates shouting things like “the Second Amendment” in response to Neil Heslin, father of victim Jesse Lewis, saying: “I ask if there is anyone who is in this room that can give me one reason or challenge this question: Why anybody in this room needs to have done of these assault-style weapons or military weapons or high capacity clips? Not one person can answer the question.”

MSNBC’s Martin Bashir ran an edited version of the clip on Monday that omitted the question, pause, and context surrounding the shouting. And so The Five co-host Greg Gutfeld tore into him and the network as having “deceptively” edited the video because “it fed in their story line that gun owners are really bad, probably racist rednecks.”

“It’s disturbing when you see media distort situation like this to edit and make it what they want it to be to say he was heckled,” Kimberly Guilfoyle added. “But when you look at the tape, that is not the case. He posed and asked a question, people responded back. It wasn’t heckling. […] The media is in such a rush, mad dash to be first and fast. they don’t care about the accuracy.”

Eric Bolling challenged liberal media watchdog site Media Matters to go after Bashir for his “egregious misinterpretation of what happened,” adding that he has a “hunch” they will remain silent.

“We edit stuff,” Bolling went on to concede, but then proclaimed that “we edit stuff when things are too long; we don’t take things out of context the way he did.”

“It fooled me,” liberal co-host Bob Beckel said, conceding that seeing the full video made him rethink his position. He characterized MSNBC’s edit as “inexcusable,” but cautioned that “it was bad taste for the people to answer the question.”

“Given the fact he lost his kid, I would have kept my mouth shut,” Beckel said. Later on, he told his co-hosts that Fox has engaged in selective editing, accusing his co-hosts of unfairly snipping President Obama‘s “you didn’t built that” line.

Perino countered that with the Obama tape, if you were to play the fill video, “it only made it worse,” and thus is different from this situation.