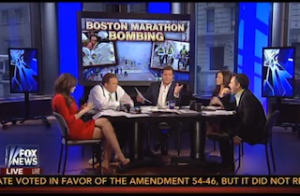 While CNN and MSNBC were broadcasting President Obama‘s remarks on the failed gun control compromise, Fox News’ The Five crew were discussing the media reaction to the Boston Marathon bombings. Co-host Greg Gutfeld went after media figures who he said attempted to “ascribe blame to people they already hate.”

Andrea Tantaros reviewed what she sees as a history of “journalistic malpractice” after major incidents like this one, from the furor over the Sarah Palin target map after Tuscon to ABC News’ Brian Ross linking the Aurora shooter to the Tea Party. She said that there seemed to be no “repercussions” when people make mistakes like these and she’s seeing it continue during the coverage of the Boston bombings.

Meanwhile, Kimberly Guilfoyle said she believes that if there was any information about the Boston attack being perpetrated by a “right-wing” radical, it would have been leaked by the “liberal media already, because they can’t wait to put that stuff out.” From there the discussion devolved into cross-talk as the hosts tried to get Bob Beckel to point out an example when a “right-winger” has ever blamed the left for one of these events.

Beckel mentioned recent remarks from conservative radio host Laura Ingraham, who didn’t exactly blame liberals, but did bring up immigration reform as an issue that should be looked at more closely in the wake of the attacks. The other, more conservative hosts jumped all over Beckel for that one, saying it’s not at all the same as speculating that a right-wing radical committed the attack.

While there have been plenty of insensitive media comments and false speculation since Monday’s attack, compared to some of the past events the hosts discussed, there has been relatively little political finger pointing this time around. Once the identity and affiliation of the suspect(s) becomes evident, that could unfortunately change.