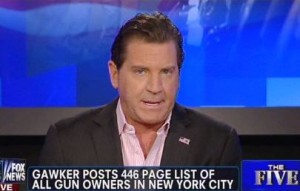 In response to Gawker’s controversial decision to publish the names of every registered handgun owner in New York City on Tuesday afternoon, Fox’s The Five retaliated by publishing the phone number and email address of Gawker founder Nick Denton for its audience.

“Those stupid wimps,” co-host Greg Gutfeld said after explaining how Gawker published the list and linked the NYPD to rape and corruption; yet when they received death threats poured in, they called the cops.

The Gawker post, originally titled “Here Is a List of All the Assholes Who Own Guns in New York City,” sparked outrage as it published a list of every NYC resident with a handgun permit — publicly-available information obtained by John Cook via the Freedom of Information Act. It was a similar move to the Journal News‘ controversial decision to publish the names and addresses of licensed gun owners in New York’s Westchester, Rockland, and Putnam counties.

Eric Bolling added: “Gawker called people crazy a-holes who own guns legally in New York City. We thought we’d point out who runs Gawker, the founder of Gawker, Nick Denton. Greg, you may know him as well.”

Denton’s image with his email address and phone number appeared on screen. Bolling continued: “There he is. Nick Denton. Here is his phone number. You can reach Nick at [email protected] if you’re really ticked off.”

“You know what, Nick,” Bolling concluded, “I’m going to call you later on today.”