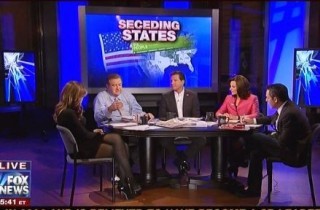 Wednesday’s edition of Fox News’ The Five took on the Texas-based movement to secede from the United States in the wake of President Barack Obama‘s re-election victory. While the hosts dismissed secession as a viable post-election response, some of the more conservative panelists rationalized the desire to secede based on how the solidly blue states have bigger governments for which the red states have to pay.

As of airtime, people from all 50 states have filed petitions on the president’s open community website, with nearly 700,000 signatures mostly concentrated in states like Alabama, Florida, Georgia, Louisiana, North Carolina, Tennessee, and Texas.

“Secession is silly,” host Greg Gutfeld said. “Secession is like running away from home. But this is your home. What country are you going to run to anyway? Hawaii?” he continued.

Eric Bolling inserted a birther joke at that moment: “But they have birth certificates now though.”

Gutfeld then asked whether the secession groups are a movement to be a concerned about, liberal co-host Bob Beckel pointed out that most of the signatures come from the deep south states.

“After every election, people get upset with whomever got elected,” Beckel said. “700,000 people represents less than one percent of the country. So what is the big deal?”

Fill-in host KT MacFarland rationalized the movement by saying that “some states don’t want to pay for other states. We are getting to the point where a number of states — east coast, west coast states — are going bankrupt, but legally cannot go bankrupt. So richer states, southern states are going to have to bail them out.”

Beckel challenged this assertion, mocking her for suggesting that Mississippi and Alabama are richer states. “I think their budgets are balanced,” she replied.

There are states in the union who are getting back, you know, 50, 60 cents on the dollar that they pay in tax. the states have an argument for seceding from the union,” Bolling added, before renouncing secession: “What it feels like to me is people are upset, they’re mad. But alm down everyone. We have lost. We can come back. Come back and win an election.”

“I don’t think we should calm down,” Kimberly Guilfoyle interjected. “Pretty soon strong states with good business practices have to carry the other states. It’s crazy. I don’t think it’s good at all.”