Fox’s The Five to House Republicans: ‘Cut Your Losses’ and ‘Move Forward’
VIDEO

Fox’s The Five to House Republicans: ‘Cut Your Losses’ and ‘Move Forward’ 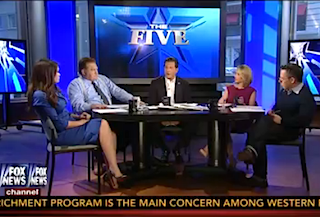 On Tuesday afternoon’s edition of The Five, the hosts went around the table, making predictions about the next 36 hours in Congress and offering advice to Republicans on how to dig themselves out of a hole caused by the government shutdown and debt ceiling showdown. Eric Bolling said it was time for the GOP to “cut their losses” and “move forward.”

“I hope it passes,” Bolling said of the House bill that would fund the government through December 15th and extend the government’s borrowing authority until February 7th. If they don’t, he said, things are only going to get “worse and worse for Republicans.” He added, “You’re losing. Take the loss and move forward. You’ll win the next fight, not this one.”

Bob Beckel predicted that House Republicans won’t be getting any “help” from their Democratic colleagues, so Boehner will have to “produce all of his votes, including his tea party people, who will not like this very much, I can’t imagine.” If the House votes the deal down, Beckel said, “the Republicans are going to be in real trouble. So I think the best interest of the Republicans would be pass thing tonight, to at least have something to negotiate with. But they may not.”

It was a relatively rare moment of across the board agreement on The Five, with Dana Perino and Kimberly Guilfoyle concurring that House Republicans need to come together and vote for the temporary solution.

Meanwhile, an admittedly “bored” Greg Gutfeld said he would have liked to see the country default, if only so President Obama could add that achievement to his list of “historic firsts.”