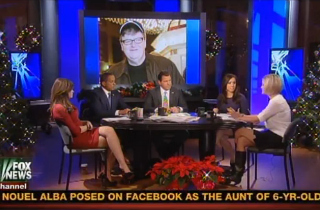 After liberal documentary filmmaker Michael Moore suggested this week that people are motivated by racial fears when purchasing firearms, Fox News’ The Five went after him, suggesting that it’s actually liberal anti-gun activists like Moore who strikes fear in the heart of gun owners.

Co-host Andrea Tantaros started off the pile-on by saying that Moore’s remarks were “beyond the pale” and he “loses credibility” on the gun issue.

Kimberly Guilfoyle added that she finds Moore “insufferable,” and that his remarks prove him to be “part of the problem — a divider, not a uniter.”

She continued: “He is putting down the country. Not a positive thing to say about Americans at all. He makes us sound like the worst country, the most corrupt and racist. Move! Bye, Michael, if you hate so it much!”

Liberal co-host Juan Williams even took issue with Moore’s comments, calling them “unnecessary” for introducing a racial element to the conversation that “allows people to ignore the reality” that gun control originated as a white effort to prevent black gun ownership.

The conversation also focused on actor Matt Damon who said he is giving up on Washington, D.C., because of its corrupt, “rigged” nature. A baffled Guilfoyle asked “What happened to him? He used to be somewhat normal and cool.” She claimed that Damon has become very “liberal and bizarre.”