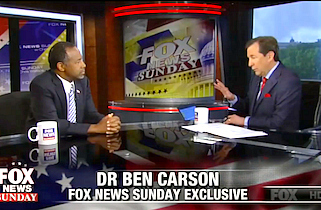 During a lightning round Sunday morning, Fox News Sunday host Chris Wallace asked neurosurgeon headline generator Ben Carson if he really believed all the things he said. The presidential hopeful said yup, he did.

Wallace pressed Carson on his comparison of the U.S. to Nazi Germany and his characterization of the Affordable Care Act as the worst thing in America since slavery. Carson defended the former by saying most of Germany did not agree with Hitler’s programs but said little. (Ahem.)

“But people oppose Barack Obama all the time!” Wallace objected.

RELATED: Ben Carson on Baltimore: You Wouldn’t Riot Against a Bad Plumber, Would You?

“There are a lot of people in our society who are afraid to say what they really mean because they may get an IRS audit, people will call them names, their jobs may be interfered with,” Carson said.

Most interestingly, Wallace asked Carson about a statement this week in which he intimated that a president could ignore a Supreme Court ruling. “Dred Scott is a perfect example,” Carson said. “The Supreme Court came up with this and Abraham Lincoln (R-The North) did not agree with it. Now, admittedly it caused a lot of conflict and eventually led to a Civil War, but we’re in a better place because of it.”

Wallace asked whether Carson was disagreeing with Marbury v Madison, which established the principle of judicial review. “This is an area that we need to discuss,” Carson said.