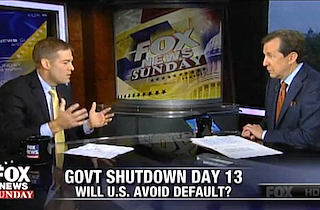 Fox News Sunday’s Chris Wallace became visibly exasperated with Representative Jim Jordan (R-OH) on Sunday morning, as the congressman repeated his intention to delay the implementation of Obamacare without clarifying how he intended to pass such a delay through Congress, especially given that previous attempts to do so have severely damaged the GOP’s approval rating.

“There’s a widespread feeling in Washington—maybe right, maybe wrong—that you’re going to have to accept in the House something that you hate, because, quite frankly, the perception is you misplayed your hands on Obamacare,” Wallace said, invoking the recent NBC/WSJ poll that not only showed the GOP’s approval rating at a record low but also the Affordable Care Act’s popularity rising. “Has your strategy of linking Obamacare to all these things backfired big time?”

“We need to delay this law, plain and simple,” Jordan said. “You can look at the polls and whatever, but we were elected to stand for certain principles. The vast majority of the American people still know this law doesn’t work, the President knows this law doesn’t work.”

“There’s still a lot of members of the House of Representatives who understand that Obamacare is unfair,” Jordan replied. “Look, I want to repeal it. We understand that’s not going to happen with this president. All we’ve asking for is delay it. Delay it for individual members just like you did for members of Congress…That is such a simple, fair, basic argument, consistent with what makes our country such a special country: equal protection under the law.”

“But you’re never going to get that through!” Wallace said. “Doesn’t it feel to you like the House Republican leadership has abandoned you?”

At this point, Wallace audibly sighed, and then asked Jordan if he understand the damage that his strategy was doing to the GOP.

“I keep coming back to this idea that somehow we’re the bad guys for standing up for the concept of fairness,” Jordan said. “This is what people elected us for. To stand up and say, you know what, we should be treated fairly under the law. This law doesn’t work. We’ve had thirteen days it’s been rolled out, it hasn’t worked…This is a simple argument about fairness. And we’re going to keep making it.”