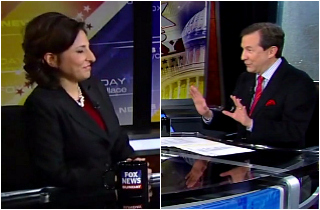 “It sounds like what you’re saying is younger people are going to pay more to subsidize older, sicker people,” Wallace challenged.

“You’re right about income redistribution,” Capretta said. “It’s $250 billion a year in Medicaid expansion and the subsidy structure that’s basically being paid for by people on Medicare through Medicare cuts and a lot of tax increases. If you want to know what the bill is really about, people in their most honest and candid moments wil admit that it’s basically taking $250 billion a year out of taxes and Medicare, and moving it into the Medicaid expansion and subsidy structures…It is a massive, massive income redistribution.”

“It’s just not fair to say they’re not getting a better health care plan,” Tanden replied. “That’s the challenge with the individual market…it’s not really insurance for a lot of people, because when you get sick, it’s not there for you.”