Fox’s Wallace to Sen. Graham: Isn’t Blocking Nominees Over Benghazi ‘Over the Top?’ 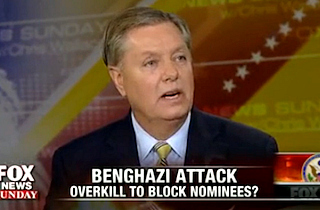 On Fox News Sunday, Senator Lindsey Graham (R-SC) argued against host Chris Wallace’s suggestion that blocking every nominee in the Senate over the right to question Benghazi survivors was “over the top.”

“I don’t think it’s over the top to find out what happened to four dead Americans,” Graham replied. “I don’t think it’s over the top for us to be able to talk to survivors…I shouldn’t have to do this. I shouldn’t have to make these kinds of threats. They should provide, in a responsible way, those who lived through Benghazi, to be interviewed separate and apart from the Obama administration, to find out exactly what happened before during and after.”

Wallace noted that the nominees—including Jeh Johnson, nominated to be Secretary of Homeland Security, and Janet Yellen, to be Federal Reserve Chair—were “people who are going to do important work for the country.” “How long are you prepared to hold up their nominations and everyone else’s?” he asked.

“I am hoping that they will relent,” Graham said. If not, he continued, “then I will ask my Republican colleagues and my Democratic colleagues: stand up to the Obama administration, don’t let them get away with this. Can you imagine if this was George W Bush, and he told the Congress after 9/11: you can’t talk to anybody because there’s a potential criminal investigation, we’re not going to investigate how 9/11 became the failure that it was?”