Frank Luntz’s Focus Groups Obama, Romney Ads: But Only One Has Bipartisan Support 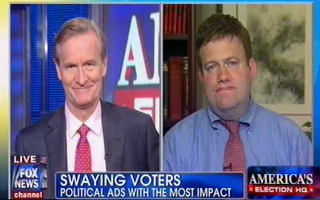 Pollster Frank Luntz appeared on Fox & Friends on Thursday where he discussed his findings from a recent focus group which tested ads from the Barack Obama and Mitt Romney campaigns airing in Wisconsin. But while both ads appealed to their respective base voters, only one ad tested well among both Republicans and Democrats – that ad was President Obama’s.

The first was President Obama’s 60-second ad which attacked Mitt Romney for his record as governor of Massachusetts. The ad took on Romney for presiding over low job growth while he was governor and for outsourcing call center jobs to India. By the end of the ad, both Democrats and Republicans rated the ad positively – 71 and 52 percent, respectively.

“That is one of the most effective Obama campaign ads so far,” said Luntz. “It goes step by step with what Romney did rather than the typical accusations or the screaming about politics. He tries to focus on the record and that’s one of the reasons why our voters in Wisconsin said that’s a legitimate attack – it’s persuasive, it’s impactful and that one works.

The second ad tested was a 30-second spot from the Romney campaign.

The ad, “A Better Tomorrow,” talked about Romney’s “focus on the deficit” as president and “unleashing America’s energy resources.” Towards the end of the ad, the narrator says Americans will have a “feeling that our country’s back” under a Romney presidency. The ad ended with a score of 93 among Republicans, but only 45 among Democrats.

“It doesn’t’ get enough of the Democrats and the reason why is they want specifics all the way up to the end,” said Luntz. “They want to know the details and, most importantly, how it will impact them. Not the policies, but the impact on regular voters.”