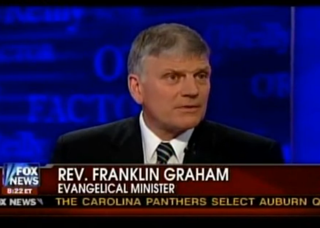 Rev. Franklin Graham has somehow become a media celebrity on the back of his doubts that President Obama is truly Christian. Graham visited Bill O’Reilly today to confirm his distaste for the President, but the conversation took a bizarre term when O’Reilly decided to grill Graham on Heaven, Hell, and the admission process for each, particularly for Holocaust victims and children.

“I disagree with a lot of the policies… as a citizen,” Rev. Graham noted of the Obama administration, repeating several times that he believed that, as a nation, “we are addicted to spending,” and that, despite believing that charity was important, “I think a lot of the spending is more than helping the poor.” O’Reilly took his opinions at face value, but failed to question them too heavily. Instead, he went to the Reverend’s bread and butter: religion.

O’Reilly then switched gears completely to the spiritual, asking about recent comments by another preacher that the concept of Hell completely defies the belief in a loving and forgiving God. Those who believe so, according to Rev. Graham, are “heretics,” as the Bible is “very clear” on the existence of Hell. “What about people who don’t know the Bible?” O’Reilly asked, using the “really stark” example of Jews who died in the Holocaust without believing in Jesus Christ. “No one will have an excuse when he stands before God,” Rev. Graham responded, without really noting whether said victims, particularly children, would be given a pass for not believing specifically in Jesus. “All I can tell you is what is in this book, the Bible,” he noted, agreeing with O’Reilly that God was “just.” O’Reilly persisted, however, until Rev. Graham just dismissed the argument– “forget the children of the Holocaust”– and directed him to the text of the Bible once again.

The question may put Graham’s followers on the defensive– after all, asking about the afterlife status of a group of people in the middle of a debate on the merits of the current executive administration is not exactly O’Reilly’s typical line of attack. In fact, one inclined to overlook the fact that Graham’s belief system may view victims of such an atrocious historical event as potentially too guilt-ridden to enter Heaven would also be inclined to perceive the question as an example of left-wing media bias. In other words, the reason one would ask about the Holocaust in an interview about President Obama, one could argue, is the same reason one would ask about racist email forwards in an interview about media bias: to smear the target with a completely unrelated subject. This theory, of course, would require the liberal smear merchant to be… bastion of conservative journalism Bill O’Reilly, and one must believe religious conservatives has yet to move so far to the right that O’Reilly is now too far left.