Freed Journalist Speaks: ‘I Remember How Good the American People Are’ 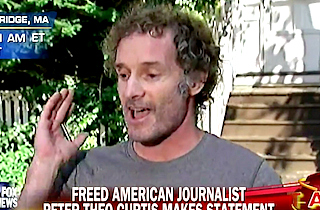 Freed American journalist Peter Theo Curtis issued a heartfelt thank you to reporters Wednesday morning, saying he had no idea the effort expended on his behalf since he was captured crossing from Turkey into Syria two years ago. Curtis was released earlier this week just days after American journalist James Foley was beheaded in Syria by ISIS.

“In the days following my release Sunday, I have learned bit by bit that there have been hundreds of people — brave, determined and big hearted people — all over the world working for my release,” Curtis said. “They have been working for two years on this. I had no idea when I was in prison. I had no idea so much evident was being suspended on my behalf.”

“I’m overwhelmed that total strangers are coming up to me saying we are glad you are back, glad you are safe,” he said. “I suddenly remember how good the American people are and what kindness they have in their hearts. And to all those people I say, a huge thank you from my heart.”

A journalist himself, Curtis promised to feed our gnawing need for content, but after he had reconnected with his family.

“In future I promise I will respond to your emails and I’ll help you guys do your job,” Curtis said. “I’m one of you and I know what you are going through. I want to help you guys and I will be there and respond. But I can’t do it now.”