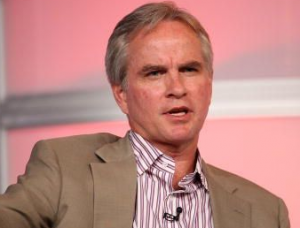 While Fox News, MSNBC and CNN soak up most of the cable news oxygen in the U.S., the Brits want a piece of the action.

Rome Hartman, executive producer of BBC World News America, believes there’s a huge piece of the news landscape being ignored by the three main players in U.S. cable news: the world beyond Washington and Wasilla.

Hartman believes the cable news networks are “relentlessly focused on domestic events and issues,” leaving the rest of the world, essentially, ripe for the picking:

“Our real reason for living at BBC World News America is to bring to an American audience a smart, sophisticated view of events and issues in the world BEYOND U.S. shores,” Hartman told Mediaite. “That’s frankly a view that TV viewers in the U.S. have a hard time finding anyplace else, because the cable nets are so relentlessly focused on domestic events and issues. We think that there has never been a time when it’s more important for Americans to understand the wider world, nor a time when it’s harder to do that based on the standard fare of Amercian networks. That’s our U.S.P.”

Matt Frei, World News America’s main anchor, was just honored with a DuPont–one of the major journalism awards in the country–for his coverage of the earthquake and aftermath in Haiti—a story where he competed directly against some of America’s top news names, including CNN’s Anderson Cooper.

“Of course, the Haiti quake was SUCH a big story that all the nets went after it really hard. It’s in situations like that when the BBC’s international reach and experience really gives us an advantage; we do it every day, so we can naturally do it well when the bell rings,” said Hartman. “But I think the duPont recognizes something more than that; it recognizes that Matt Frei and Matthew Price represent a standard of storytelling that we’re really proud of, and that few of our competitors can match in the field.”

In 2011, the BBC has bold plans to grab news viewers away from CNN, MSNBC and top-rated Fox News—or, perhaps more accurately—to attract new news viewers who have interests beyond the primetime politics and debates that have driven cable news coverage.

Here’s the DuPont citation for the BBC’s Matt Frei and Matthew Price:

“Under terrible conditions, Matt Frei and Matthew Price covered Haiti in the aftermath of the January 2010 earthquake with solid and compassionate reporting. The reporters and their crew demonstrated great courage walking into the wreckage and scenes of unrest to get the story. With sober resolve on the ground, they accurately captured the unfolding tragedy. As a result viewers saw new angles of the news that were not reported elsewhere; intensely personal stories arising out of a catastrophe and told through the eyes of Haitians. Careful writing and shrewd observation in the reporting bolstered the strong images of a country in chaos.