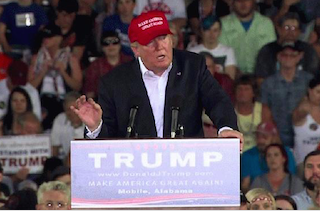 With its live coverage of Donald Trump’s big rally in Mobile, Alabama Friday night, Fox News won the night in both the 25-54 demo and total viewer ratings. Fox’s ratings peaked at 9 p.m. during Trump’s speech with 810K in the demo and 3.632M total viewers.