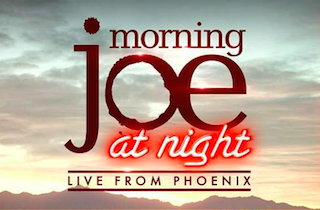 MSNBC’s pre-Super Bowl experiment, Morning Joe at Night, failed to ignite much excitement in the ratings Friday night, with the 8 p.m. ranking last in the 25-54 demo in primetime with just 65K viewers despite the promise of Katy Perry. The second hour improved slightly to 72K in the demo.

Between 8 and 10 p.m. ET, Morning Joe at Night came in third place in both the demo total viewers, behind Fox News and CNN. Fox’s The O’Reilly Factor was #1 overall with 494K in the demo and 2.826M total viewers.