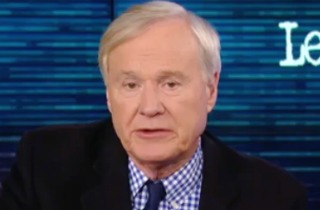 With 112K viewers in the 25-54 demo Friday evening, Hardball with Chris Matthews came out ahead of MSNBC’s primetime offering, All In with Chris Hayes and The Rachel Maddow Show. Those shows had 84K and 96K demo viewers, respectively. Note that this is the second time so far this year that Rachel Maddow has delivered less than 100K viewers in the demo, and the 7th lowest demo in the history of her show (which debuted on 9/8/08).

However, in total viewers Maddow had the highest rated show on MSNBC’s schedule with 731K, followed by Chris Hayes with 644K and then Chris Matthews with 608K.