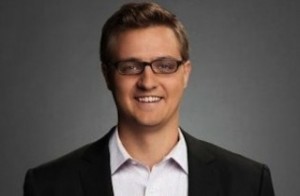 MSNBC’s All In with Chris Hayes came in third place at 8pm Friday night, behind Fox News’ The O’Reilly Factor and CNN’s Anderson Cooper 360 in both the 25-54 demo and total viewers.