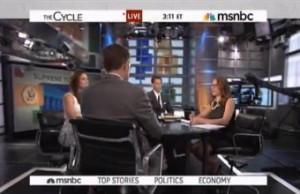 Things aren’t looking any better for MSNBC’s 3 p.m. panel show, The Cycle. On Friday, the program once again came in third place among the big three cable news networks, taking in less than 50,000 viewers in demo (that’s less than half of what CNN Newsroom brought in during the same time slot), and 315,000 in overall viewers. This not only marks the lowest demo in all of MSNBC’s programming for that entire 24 hour-period, but it was also The Cycle’s lowest demo since its debut.

To further compare, here’s how the three networks stacked up on Friday at 3 p.m.:

And here are the rest of your Friday night ratings: