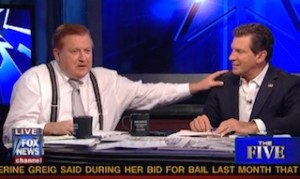 Fox News’ The Five has shown some solid growth in their ratings since their debut, but they hadn’t yet been the highest-rated show of the night on any channel. Until Friday night.

Not only did they win the time slot for the 25-54 year-old demo, but they took down every other news show on cable. Granted, Juan WIlliams was subbing once again for Bill O’Reilly, but The Five still beat out the rest of the shows on the FNC slate, all of which are normally very strong.

Some other fun facts from Friday: