From Cheese to Aliens: The 6 Best Questions from Kimmel’s Interview with Bill Clinton 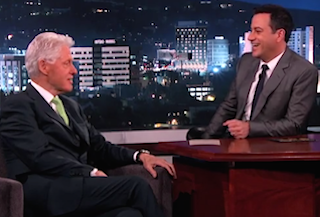 After spending some time with the full Clinton family last week in Arizona, Jimmy Kimmel sat down with former President Bill Clinton Wednesday night for an extended interview that covered a wide range of topics. While things did not get nearly as awkward as they did during Kimmel’s seminal interviews with Kanye West or Rob Ford, it was an equally entertaining three segments of late night television.

Below are the six best questions Kimmel asked Clinton during the interview:

1. “Which do you miss more, being president or cheese?”

After Clinton revealed the one thing his misses most now that he’s a vegan, Kimmel wanted to know which he missed more, being president or eating cheese.

2. “How do you get young people to do anything at all?”

While Clinton and his family are surrounded be bright, young, eager people who want to change the world for the better, Kimmel’s audience just has guys who work at Chuck E. Cheese.

3. “If I was president — and I won’t be, let’s be honest — the first thing I would do after putting my hand on that Bible and taking that oath to serve the country is — I probably wouldn’t even finish the oath. I would run to the White House and demand to see all the classified files on the UFOs. Because I’d want to know what is going on. Did you do that?”

4. “Do you think this current climate, where the parties are so divided and people really have a very difficult time working together on almost anything, is a temporary situation?”

After saying “I don’t know,” Clinton attempted to come up with an optimistic answer to Kimmel’s question.

5. “Will you run for vice president?”

That’s what Kimmel went with when Clinton refused to give an answer to this riddle: “Fill in the blank: Next election my ‘blank’ will run for ‘blank.'”

6. “Do you miss being the first African-American president?”

On this question, Clinton was clear: “I loved being called the first black president, but Barack Obama really is, he deserves it.”