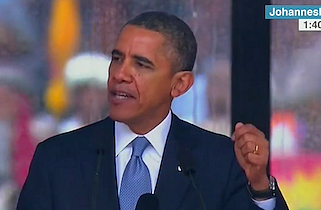 On a rainy Tuesday afternoon in Johannesburg, South Africa, tens of thousands gathered at FNB Stadium to pay respects to departed civil rights icon and former South African President Nelson Mandela. President Barack Obama delivered a speech, at that memorial, paying tribute to Mandela’s life, and calling on the world to remember him by continuing to fight injustice.

His remembrance of Mandela’s life was followed by a challenge for people to ask themselves “how well have I applied his lessons in my own life?”

“It is a question I ask myself – as a man and as a President,” President Obama continued. “We know that like South Africa, the United States had to overcome centuries of racial subjugation. As was true here, it took the sacrifice of countless people – known and unknown – to see the dawn of a new day. Michelle and I are the beneficiaries of that struggle. But in America and South Africa, and countries around the globe, we cannot allow our progress to cloud the fact that our work is not done. The struggles that follow the victory of formal equality and universal franchise may not be as filled with drama and moral clarity as those that came before, but they are no less important. For around the world today, we still see children suffering from hunger, and disease; run-down schools, and few prospects for the future. Around the world today, men and women are still imprisoned for their political beliefs; and are still persecuted for what they look like, or how they worship, or who they love.”

Here’s video of the speech, from CNN, followed by the prepared transcript, via The White House:

FULL Transcript (via The White House):