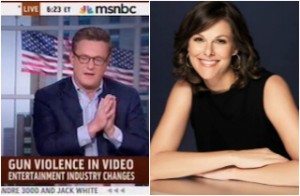 Morning Joe host Joe Scarborough and CampbellBrown.com curator Campbell Brown took turns, this week, urging President Obama to give the movie and video game industries the same treatment he’s been giving to the regulation of guns. While most liberals were predictably put off by this notion, I agree with Brown and Scarborough that the President should treat the movie and videogaming industries the same way he’s treating the gun industry.

Joe Scarborough and Campbell Brown, in all fairness, should not be treated the same in this critique. Since the horrible events in Newtown, Joe Scarborough has been a vocal champion of new gun regulations, and he deserves credit for that. He has done a lot of good in this regard, even if he has done damage in others.

As such, Scarborough deserves the benefit of the doubt that he’s operating in good faith, and may just be a tad misguided, or misinformed, here. This week, he tried to cash in some of that credit in the form of getting President Obama to give Hollywood and videogames their very own “Participant” awards in the effort to curb gun violence. On Friday, Scarborough recalled Sen. Joe Manchin‘s (D-WV) insistence that if the President’s post-Newtown proposals focused exclusively on guns, it would fail. “Joe and I were burning up the phones talking to a lot of people in the White House and in the Senate and said, ‘Okay, listen, if you do this, you have to be smart about it. If you make this just about guns, you’ll get no where.’ I’ll just say it. Nobody listened to Joe. They just didn’t listen to him. They said we’ll make this about guns, and we’re not going to cross Hollywood, and not going to cross the video game makers.”

Scarborough’s case seems to rest, primarily, on the premise that Hollywood and videogames should be “crossed” a. because the NRA is being “crossed,” and b. because violent movies and videogames just have to be bad for kids (more on that later). It also assumes that the President hasn’t done anything on the issue, when he did urge Congress to fund research “into the effects that violent video games have on young minds.”

Campbell Brown, on the other hand, gets few points, if any, for good faith. Brown’s devotion to the mainstream media “both sides” narrative has permeated her commentary on Newtown, with nary a thought to the issue of gun regulation. Within a week of the mass shooting, Brown published a commentary accusing “both sides” of “us(ing) a slaughter” to “advance their ideology,” pitting wingnut media figures Mike Huckabee and James Dobson, on one side, against a single labor leader with a blog, who got tired of wingnuts slagging teachers and wrote a misguided couple of paragraphs. Both sides, you guys!

In her WSJ op-ed, Brown called on the President to spread some of the NRA love around to the film and videogame industry, and unlike Joe Scarborough, actually offered some suggestions (which I’ll get to in a minute), but also slammed the push to regulate guns. “The president’s campaign against gun violence has produced a stale debate marked by lots of speeches with little achieved,” Brown wrote, adding that “A more creative chief executive would have used this moment to widen the discussion by drawing attention to the increasingly graphic violence so pervasive in television shows, movies and videogames.”

She doesn’t explain how “widening the discussion” would help with “achieving” things on violence prevention, because that’s not the real aim here. When Campbell brown calls the focus on gun regulations “stale,” she’s right; we’ve had these conversations a million times before, and not learned from them. Her solution, though, is to continue not to learn anything, while focusing time and energy on something of questionable relevance, about which nothing measurable can be done.

Since January 1, 2000, the Federal Communications Commission (FCC) has required all new television sets 13 inches or larger to contain a V-chip. You can usually tell whether your television has a V-chip by looking at the packaging. If you no longer have the packaging, V-chip-equipped televisions will have the V-chip option displayed on the menu.

That federally-required V-chip (the “V” is for “violence”) allows parents to program their television to block movies and TV shows based on the content ratings, which delineate violence in programs for children as young as 7 years old. The FCC has also studied ways to help parents block content on other media platforms.

Brown also suggests that the President talk to MPAA President Chris Dodd about shifting the film ratings board’s emphasis to concentrate more on film violence, which is easy enough to do, and maybe has already been done, but what she really wants is some public display of the MPAA’s scalp to go along with Wayne LaPierre’s. Her issue is that the President only paid “lip service” to violent media in that one speech (and committed research dollars), but has spent the rest of his speeches on “stale” attempts to regulate the weapons that actually do the killing. That’s a bit like saying “Hey, firemen, enough of this stale hoses and water business, you wanna get in there and check the extension cords? Maybe stop for a few minutes to study Spontaneous Human Combustion?”

Neither Campbell brown nor Joe Scarborough can point to a single thing the President can actually do about film and game violence, because he’s already doing everything that can be done, literally. The film ratings are voluntary, and the V-chip law is as far as the government can go, because the Supreme Court has been very clear about what constitutes protected speech, including videogames. Justice Antonin Scalia wrote the majority opinion in a 2011 Supreme Court case which found that videogames are protected by the First Amendment. The only chance there is of getting around that is the possibility that future research demonstrates a harmful medical effect from the process of playing violent videogames, rather than the content. Available, often-distorted research hasn’t shown that, and has even shown more positive effects from game play than negative ones, but sure, let’s have some more research. You know who supports that? Yes, it’s President Obama.

But where Scarborough, Campbell, and I agree is that the NRA should be treated the same as Hollywood and the videogame industry. The President should take some of the emphasis off of the NRA once the law has reached the Constitution’s limit on what it can restrict. We’re nowhere near there yet, though. The Constitution allows Congress to make laws banning certain types of firearms (like machine guns), and we already have laws requiring background checks, so expanding them to cover every criminal could hardly be unconstitutional. We even have a national firearms registry for certain weapons. There has been no V-chip for guns.

The President should also take some of the heat off of the NRA when the gun manufacturers take steps like the motion picture and videogame industries have, to self-regulate access to their much more harmful products. The ESRB ratings prevent kids from getting violent videogames without their parents’ permission, and are strictly enforced with retailers. The problem there, of course, is that millions of parents buy the games for their kids anyway. For example, one Joseph Scarborough, who said on Friday that “I’m not saying ban all violent video games. My sons would never talk to me, again, if I did.”

So what, then, are either of these people saying? That someone should have to go stand in the corner to keep Wayne LaPierre company? Fine, I nominate Campbell Brown, who is hurting America by pretending that gun violence is like the World Series of Tee-Ball, and everyone should get a rebuke trophy (Joe gets a pass, for now, for going so hard at the NRA). The NRA and the gun industry have earned this harvest of reproach. Let them reap it.