Gabby Giffords’ Husband Mark Kelly: Guns Have Turned ‘Every Corner’ Of America Into Places Of ‘Carnage’ 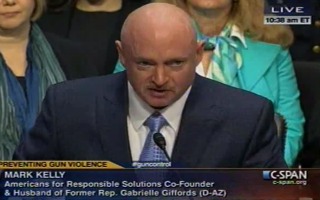 Former Rep. Gabby Giffords (D-AZ), a victim of a mass shooting in 2011, and her husband, Mark Kelly, testified before a Congressional panel on gun violence on Wednesday. Kelly told the assembled members of Congress that gun ownership is a responsibility that Americans have not taken seriously by safeguarding society with laws that curtail needless death. He said that modern weapons “have turned every single corner of our society into places of carnage and gross human loss.”

“Gabby is a gun owner and I’m a gun owner,” Kelly told the Congressional panel. “We have our firearms for the same reason that millions of American just like us have guns: to defend ourselves, to defend our families, for hunting, and for target shooting.”

Kelly said that he and his family believe in and support the Second Amendment. However, “rights demand responsibility,” he said.

Kelly concluded by saying that the Founding Fathers confirmed a right upon modern Americans that they have behaved responsibly with.

Watch Kelly’s testimony below via C-SPAN: