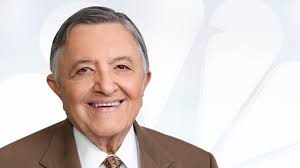 For New Yorkers of a “certain age” news that Gabe Pressman has passed away will come as tough news to stomach.

Pressman was an iconic news reporter for NBC New York Channel 4 during a pre-Internet time when local news was the most important and immediate place to find out about, well, local news.

In a lovely obituary in the NY Times, Robert McFadden writes:

A profound, matinee-idol anchorman he was not. But to generations of mayors, governors and ordinary New Yorkers, he was Gabe: the short, rumpled, pushy guy from Channel 4 who seemed always on the scene, elbowing his way to the front and jabbing his microphone in the face of a witness or a big shot.

Over the course of a storied career, Mr. Pressman covered — and, at times, sparred with — every New York City mayor from Robert F. Wagner to Bill de Blasio. He reported on decades of major news events, including the sinking of the Andrea Doria in 1956 and Woodstock in 1969. He kept at it long past the age when most people retired and kicked back, a steady presence in a rapidly changing media landscape.

Mr. Pressman worked for several newspapers, including The New York World-Telegram and Sun, and for a radio station before embarking on his television career in 1956 at WRCA, a forerunner of WNBC. Except for a stretch from 1972 to 1980 at its Channel 5 rival, known then as WNEW, he spent the rest of his working life with NBC’s New York flagship station.

Pressman’s death hits hard for New Yorkers who grew up watching his tireless and fearless reporting. He was not afraid to stick his nose in anyone’s business, but always did it in the most respectful and journalistically sound way. So his death is not just a day to note his passing, but also a time to reflect on a different era of journalism. Where the Internet didn’t exist and being first on a story wasn’t a higher priority than being correct on a story.

Everyone in the media business would do themselves a favor by honoring Pressman’s legacy by aiming for the very high standards in reporting that marked his legendary career.