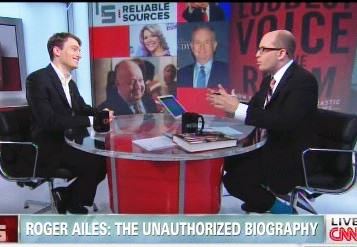 Gabriel Sherman, author of the much-anticipated unauthorized biography of Fox News CEO Roger Ailes, sat for an in-depth interview with Reliable Sources host Brian Stelter on Sunday morning, and said that in the three years of research for his book, he discovered that Ailes had built Fox News into a political machine masquerading as a news organization, one that existed to effect Ailes’ political agenda.

“What I learned is that Roger Ailes has created a political operation that employs journalists,” he said. “It exists for two reasons: to generate as much profit as possible for its corporate parent, Rupert Murdoch, and to advance the personal, political agenda of its founder, Roger Ailes…The story is not Fox News, the story is Roger Ailes. The network is a complete expression of his worldview.”

“No, I’m saying it’s a political machine that employs journalists,” Sherman said. “Roger Ailes, with Fox News, has surpassed the GOP…He saw a day when television was going to move ahead of the political party. And he has achieved it. Inside Fox News, Ailes has disdain for the GOP; he said to his executives last year that the GOP could not organize a one-car funeral…It is a testament to Roger Ailes’ genius that he has been able to keep the true nature of Fox News secret from the American people for seventeen years.”

Sherman detailed Ailes’ political views, which according to one source including sending Navy Seals to the U.S.-Mexico border to pick off illegal immigrants. Sherman cited another story in which Ailes privately agreed with Glenn Beck’s assessment of President Barack Obama’s disdain for white people, adding, “Roger Ailes is more extreme than Glenn Beck. One thing that makes Roger Ailes a genius is he obscures his true agenda. Glenn Beck is transparent.”

“This latest effort appears to be another example of the agenda-driven cottage industry built on attacking Fox News. The author’s failure to secure an interview with the principal subject does not absolve his fact-checking obligations with the network.”

Watch the first half of the interview below, via CNN:

Watch the second half, via CNN: