Gabrielle Giffords Announces She Is Resigning From Congress 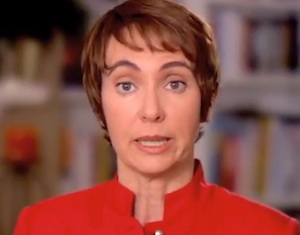 Arizona Congresswoman Gabrielle Giffords announced in a video posted to her YouTube account that she was resigning from office to focus on her recovery.

“I have more work to do on my recovery, so to do what is best for Arizona, I will step down this week,” Giffords said.

RELATED: Gabrielle Giffords Tells Diane Sawyer How She Felt When Told Of Shooting: ‘I Cried’

“I will return and we will work together for Arizona and this great country.” Giffords added. “A lot has happened over the past year. We cannot change that. But I know on the issues we fought for, we can change things for the better.”

According to the Arizona Daily Star, “as one of her last acts as a member of Congress, Giffords will attend the State of the Union speech Tuesday at the Capitol.”

THE WHITE HOUSE
Office of the Press Secretary
FOR IMMEDIATE RELEASE

Statement by the President on Resignation of Congresswoman Gabrielle Giffords

Gabby Giffords embodies the very best of what public service should be. She’s universally admired for qualities that transcend party or ideology – a dedication to fairness, a willingness to listen to different ideas, and a tireless commitment to the work of perfecting our union. That’s why the people of Arizona chose Gabby – to speak and fight and stand up for them. That’s what brought her to a supermarket in Tucson last year – so she could carry their hopes and concerns to Washington. And we know it is with the best interests of her constituents in mind that Gabby has made the tough decision to step down from Congress.

Over the last year, Gabby and her husband Mark have taught us the true meaning of hope in the face of despair, determination in the face of incredible odds, and now – even after she’s come so far – Gabby shows us what it means to be selfless as well.

Gabby’s cheerful presence will be missed in Washington. But she will remain an inspiration to all whose lives she touched – myself included. And I’m confident that we haven’t seen the last of this extraordinary American.