Game of Thrones Review: A Happy Wedding in King’s Landing, Where Nothing Bad Happened 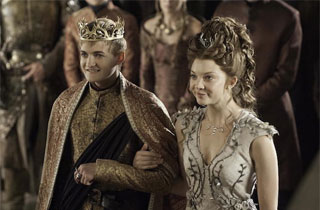 In memoriam of Joffrey I, a compilation of some of the late king’s greatest hits:

HOUSES: Immediately after the Lannisters consolidate their rule via King Joffrey, he goes off and 1) dies a gruesome death at his own wedding, and 2) proves, right before he dies, that he would have been the worst ruler ever seen in the kingdom of Westeros. Who would pay people to assault a guy with apples? Who would pour wine on his uncle’s head? Who would openly mock his wife’s family by hiring a dwarf dressed as his wife’s former husband, mounted atop a dummy of his gay lover (and his wife’s brother), to perform at a wedding? Who would pay another dwarf to hump Robb Stark’s head while his sister was forced to watch? Joffrey, that’s who.

While we’ve all been waiting for this little shithead’s death ever since he became the king, I think it’s safe to say that the audience desperately wanted to see Joffrey get his comeuppance via blazing, dramatically poetic justice — like, for instance, Arya stabbing him in the throat. (“Can you walk, boy?”) Instead, he was poisoned by someone, and we don’t know who that someone is, meaning anyone with an axe to grind against the Lannisters has a motive, and, more importantly, the will to actually execute the plot. It could be anyone. How many people at the wedding insulted the Lannisters to their face during this episode? We count Oberyn, Olenna, Loras, Pycelle (by accident, because he smelled like cat pee), and Tyrion (to the King).

Granted, everyone insulted the Lannisters because the Lannisters were acting entitled, irrational, and downright arrogant throughout the wedding sequence: Tywin refuses to acknowledge the Tyrell’s financial contribution to the Kingdom, Jamie jealously threatens his sister/lover’s future husband Loras (proving he has terrible gaydar), and Cersei does, well, everything wrong. Even if Tyrion ends up being Joffrey’s murderer, it signals huge and irreparable fractures within House Lannister itself — fractures that can’t be easily repaired by disavowing their grotesque, perverse, kinslaying dwarf, as Tywin and Cersei will predictably do.

So which house is ahead? Technically, the Lannisters — their second, hopefully non-psycopathic son is next in line to the throne — but the episode reveals that their grasp of power is tenuous at best, and an easy target at worst. Seriously, they’re in debt to the Tyrells, their daughter Myrcella is a hostage in Lannister-hating Dorne, and their son was murdered while a Stark mysteriously disappeared from the wedding, along with a fool. Who could have possibly done it?

(Also, the Boltons are sitting pretty and mauling women to death with dogs, but in their own little world at the Dreadfort, they’re doing well — especially the part where they psychologically broke Theon. We’ll get to them soon.)

POLITICIANS: If we could show Joffrey at the bottom of a very, very long list of Westeros’s politicians, we would, but there are too many politicians in this show to list before we hit anywhere near Joffrey-level bad. Besides, he’s dead. No one has power when they’re dead.

But it’s good to see Varys again, and even if he doesn’t get to sit on a throne or throw his Lannister/Tyrell coin about, he does something better: he knows exactly what the Lannisters are about to do, and what they will end up doing. But what he wants remains unknown, despite that monologue to Tyrion in Season 2. (Part of us refuses to believe he told Tyrion to send Shae away out of kindness and concern.)

Right now, Tywin’s in the odd position of having to react to events. And Tyrion, poor Tyrion, walked himself into the worst possible trap: with the right framing, everything he has ever done and said could be spun into admissions of guilt. In this case, we’re going to rank him below Joffrey, because at least Joffrey’s dead.

FIGHTERS: Welp, none of that happened this week. Except, perhaps, Jaime moping over his sad stump and learning how to fight again with his sad left arm. The winner? Bronn. Which means this was a boring week of fighting, as much as we love Bronn. We’re skipping the rankings this week. WOMEN: Without Daenerys and her army of neocon dragons in this episode, Westeros’s women have to rely on other methods to maintain power. Margaery smiles her way through her husband’s savagery, as if Princess Di married Jeffrey Dahmer. Olenna has Margaery’s ear and her absolute trust. Cersei resorts to bitchily undermining Margaery’s charitable acts. (Someone hasn’t read Lean In.)

But Melisandre, up in the north? The Red Woman’s power is so strong that she can get Queen Selyse to happily burn her own relatives alive. Margaery can’t say that.

THE NORTH: While the Wildlings and the Night’s Watch don’t make appearances this episode, Bran and the Boltons do, and boy does it suck that Bran’s crippled, because he’s now being chased by the one person possibly more psychotic than Joffrey.

In one of the most unsettling sequences in the episode, Ramsay wins back his father’s trust by demonstrating how he turned Theon Greyjoy into the feeble and unfailingly loyal Reek, via the magic of relentless physical and psychological torture. Cruel? Undeniably. Powerful? In a perverse way, yes: the bastard Ramsay proved to his father Roose that his unscrupulous methods worked, and Roose, the guy who stabbed Robb Stark at his own wedding, is nothing if not an unscrupulous man who wields considerable power. Rumsfeld should have been so lucky.

Also, whatever the “Three-eyed crow” is, its power is strong enough to make a crippled boy travel all the way beyond the wall to learn the art of greenseeing. Rounding out the group: Hodor. Because hodor.

See you next week, beautiful people! And remember, Joffrey always loved you.