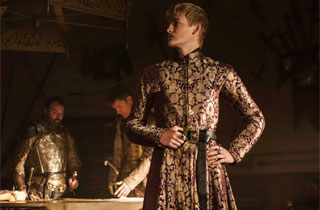 Here’s how we do things: each week, we’ll review how well the players did in each episode, and rank our top five in each category (Houses, Politicians, Fighters, Women, and The North). Obviously, there are massive spoilers in each review, so be very, very careful. And for you book readers, please don’t skip ahead and ruin things for everyone in the comments, or we’ll make you do a Penance Walk.

HOUSES: It’s safe to say that the Lannisters have won the game of thrones for now: season 4 opens with Tywin Lannister melting down the symbolic, ancestral sword of House Stark, made of exceedingly valuable and rare Valyrian steel, to make two swords for his own family. (To gratuitously hammer that point in, Tywin throws a dead wolf in the forge as well. Two symbols for the price of one.) However, despite their victory in the War of the Five Kings, the Lannisters’ power hinges on the rule of the new King Joffrey, which raises one issue: Joffrey is an unrepentant, sociopathic, Aaron Carter-esque idiot ass (and rather famous for it, too).

The only way to rely on Joffrey and his claim to the Throne is to control him — something Tywin Lannister, possibly the most competent ruler we’ve seen in the Seven Kingdoms, is capable of, but this episode sees his actual parents losing their grips, what with Cersei slipping into alcoholism and the handless Jamie literally losing his grip on Joffrey. (“You’re a 40-year-old knight with one hand,” he sneers to his uncle/dad, after pointing out that Jaime will never have enough accomplishments to fill a page in the Kingsguard’s White Book.) Into this power vacuum step the Tyrells, whose PR-savvy daughter Margaery will soon wed Joffrey and become Queen. While she and her grandmother Olenna, played by the fantastically bitchy Dame Diana Rigg, don’t get a lot of screen time in this episode, they do understand how to exercise soft power in King’s Landing. Commissioning a wedding necklace from every jeweler in the capitol wins them huge brownie points from the city’s artisans, but we have a feeling that Margaery commissioned this hideous statue to stroke Joffrey’s ego.

As for the rest of the Houses highlighted in this week’s episode, they’re either non-players or unknown. House Stark is essentially down to one depressed teenage girl (Sansa) who’s married to the people who murdered her family, and one murderous, anonymous child (Arya) about to be sold by the free-agent Sandor Clegane for a ransom. House Targaryen, in the form of Daenerys and her giant freedmen army, may technically be the greatest threat to Lannister rule (because dragons), but she spends the episode marching across a gorgeous platte on a totally different continent. (We’re not sure, however, whether Daario Naharis’s “advice on ruling”/seduction tactic is going to work very well as a political strategy, especially for someone used to burning her enemies alive.)

This leaves the sexy Dornish newcomers in House Martell, whose purpose is clear (get revenge on the Lannisters for killing Oberyn’s sister), but whose methods are not. For, if you somehow can get away with it (and the Martells certainly think they can), how do you take revenge against the most powerful family in Westeros? Does Oberyn want to kill the entire yellow-haired family? Does he want to kill Tywin? Why does he tip his hand to Tyrion with the cryptic remark that “the Lannisters aren’t the only ones who pay their debts”? Or will he just plow his way through Littlefinger’s brothels? Where is Littlefinger, anyway?

Though he’s by no means a player, the re-introduction of the fool Ser Dontos highlights how far one can fall: he’s the last of a once-great family who lost their power via drunkenness, and now resorts to giving his mother’s precious necklace to Sansa as a way to help his family “shine in the sun” before being lost to memory. However, let’s recall one of the fundamental rules of Westeros: Thou Shalt Not Do Something Nice for Sansa Unless Thou Hath Ulterior Motives. Something is up with this dude — otherwise, why sneak through the godswood to find her?

POLITICIANS: Tywin controls everything, including King Joffrey. Daenerys has an army, but not the Iron Throne, which Tywin possesses. Though screwed out of everything, including respect and his girlfriend Shae, Tyrion’s intuition helps him see the potential threat of the Martells to the Lannisters. Tywin wins by default.

FIGHTERS: In a world where one’s reputation is earned with his sword (the White Book scene does a great job illustrating that), Oberyn, apparently a legendary fighter, takes the category due to the sheer fact that no one wants to piss him off, except for a few drunk Lannisters who learn that pissing him off is a terrible idea. Sandor Clegane gets second place, not just because he killed five men, but also because he may be the only man in Westeros who can get away with flipping King Joffrey off. The once-legendary Jamie, however, is now at the very bottom of this category, because being a one-handed knight on the Kingsguard makes Jamie useless enough for Tywin to casually threaten to disown him. Guy can’t even wave properly anymore:

WOMEN: As multiple thinkpieces throughout the internet state, the power of women in medieval Westeros is extremely limited. Olenna, however, demonstrate her utter mastery of feminine power in this episode to her pupil Margaery (via the power of incredibly expensive jewelry), and Brienne exercises her hard-won respect as a fighter by convincing Jamie to uphold his vow to Sansa’s now-dead mother.

Daenerys has a giant army and dragons, though. As of now, she wins by default.

THE NORTH: Considering that the series spends so much time on the fact that these petty power squabbles drain focus from the true threat to the Kingdoms (undead White Walkers), we’re going to consider The North separate from the rest of the players. However, as this episode makes clear with the introduction of Janos Slynt, the pompous commander from King’s Landing present at Jon Snow’s trial, the Night’s Watch depends heavily on the Iron Throne for funding and manpower (and, judging by how well the Night’s Watch can shoot arrows, that manpower isn’t very good). This is also the episode that shows what happens when the Free Folk lose their ability to communicate via animal possession: they also lose their ability to coordinate, allowing their smaller factions to be strong-armed by cannibalistic Wildling Thenns. Everyone is in a stalemate, nothing is happening.