Game of Thrones Review: Let Slip the Mammoths of War 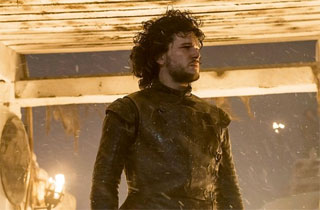 Welcome to the most Mediaite-ish way of reviewing a television series, ever: the Westeros Power Grid, in which we analyze and rank the players in each episode of Game of Thrones according to how well they play the Game.

It’s slightly unfair that the entire episode ends up only being part one of the kinda-teased battle between the Wildlings and the Night’s Watch, because damn it, the finale has to tie up so many loose ends. (Where’s Hodor and friends? What’s Darth Sansa going to do? Has Arya totally lost it? And where the hell is Ser Pounce?)

But considering how action-packed this episode is, we’ll give it a pass — even if it means we only focus on the fluid power dynamics of the North, and how 102 somewhat-trained men (and a direwolf) managed to hold off 100,000 wildlings (and some giants, and some mammoths, and some cannibals, and — you get it, the odds were totally stacked against them.)

So while all the House struggles, mopey warriors, political schemers, and lady plotting gets put on hold, we’ll just have to make do with discussions about how many ways there are to die in…

THE NORTH: Can we just talk briefly about how this was the most expensive episode ofGame of Thrones to date? Sure, it meant less dragons, but it also meant more beautifully long tracking shots like this one:

And the introduction of Miley Cyrus to Westeros:

And with that kind of budget (mammoths are expensive, man), one better have the emotional cojones to back it up, story-wise — and that story is the one of Jon Snow becoming the de facto leader of the Night’s Watch.

Fittingly, no one actually gives Jon Snow the command of the wall: Alliser Thorne hands it over to Janos Slynt, Janos Slynt runs away like a coward, and (with an assist from Grenn) Jon valiantly takes over command with no dissent whatsoever. Leadership comes naturally to Jon — think of all the times he managed to piss off the commanders by, y’know, actually encouraging his brothers to learn how to fight — and, in a surprisingly honest moment, Alliser Thorne acknowledges Jon’s abilities in his own asshole way. ” “We should have sealed the tunnel when we had the chance, like you suggested,” he admits privately to Jon once he sees that the Wildlings actually do have gate-breaking mammoths and giants. To his credit, he offers Jon the chance to rub it in, and puts aside their feud for the moment for the sake of defending the Wall, and we hate to say it, but Alliser Thorne is a damn good leader in the heat of combat. (If peacetime does come back, though, he’s openly ready to begin hating Jon Snow’s guts again. Hate-spiration.)

Though he doesn’t realize it himself, and openly calls himself a coward, Sam Tarly’s quickly becoming one of the most respected men on the Wall, with his fellow crows actually asking him for advice on how to be brave in the face of terrifying and certain doom. He’s had the experience with Terrifying and Certain Doom — he’s the only man who’s killed a White Walker in combat — but he tells Pyp that at that point, all he knew was that the Walker would have killed Gilly and her baby. “I wasn’t Samwell Tarly anymore. I wasn’t a Stewart in the Night’s Watch, or the son of Randyll Tarly. I was nothing at all. And when you’re nothing at all, there’s no more reason to be afraid.” He is, however, afraid now: “I’m not nothing anymore.” (What he is, is AWESOME.)

But the man at the top of the power grid: Mance Rayder, who doesn’t appear in this episode but whose presence is felt due to the fact that he somehow managed to get a hundred thousand bickering Wildlings to join forces and march against the Wall. (Granted, as he said in Season 2, the choice was to either march or die via White Walker, but still). Kill Mance, Jon thinks, and the entire Wildling enterprise will fall apart. He’s right, but ugh why does that bit of drama have to happen next episode ugh stupid whiteout.

(Tormund’s on the list, mostly because he’s a fierce Wildling warrior who won respect by killing hundreds of men and fooking at least one bear.)

NEXT WEEK: Season finale, which means someone’s gotta have a happy ending. Right?

[All images via HBO]