Game of Thrones Review: Oh My God It Was HIM?! 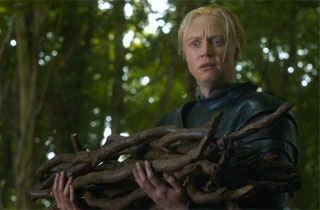 Here’s how we do things: each week, we’ll review how well the players did in each episode, and rank our top five in each category (Houses, Politicians, Fighters, Women, and The North). Obviously, there are massive spoilers in each review, so be very, very careful. And for you book readers, please don’t skip ahead and ruin things for everyone in the comments, or we’ll make you do a Penance Walk. We don’t care if you’re pretending to be Jojen Reed.

While this may have been a rather calm episode (it’s rather refreshing to see only one battle sequence, one gruesome death, and one violent rape threat), this episode also happens to turn the Power Grid on its head with two massive revelations, particularly among the individual political players:

POLITICIANS: LITTLEFINGER IS RESPONSIBLE FOR EVERYTHING WHAT.

The revelation that a somewhat minor, skeevy-looking character happens to be responsible for all of the misery in Game of Thrones carries even more weight when you look at Littlefinger’s background: a very minor lord from a tiny and extremely poor holdfast, Littlefinger managed to claw his way to the top of Westeros’s society, mostly by leveraging Lysa Tully’s unrequited love for him to get lucrative appointments, eventually ending up as the CFO of an entire continent. Also, by marrying this totally psycho biddy — who, did we mention, got her to kill her husband and accuse the Lannisters of the murder, thus setting off the plot of the entire series — he’s now Lord of the Vale, which is a pretty big deal in Westeros.

But let’s get back to that murder thing, and the careful observation Varys made of him many episodes ago: “He’d see the realm burn if he could be king of the ashes.” We know that his claim of balancing the crown’s books is a total sham, and that the crown is deeply in debt to the threatening Iron Bank of Braavos. We know he’s managed to broker endless deals seemingly to the benefit of multiple parties (getting Catelyn to release Jaime, getting Margaery wed to Joffrey, etc). And we know that he’s also responsible for murdering Joffrey. Whatever his plan is — either to create ultimate chaos, or to strategically maneuver everyone for his own benefit — Littlefinger is, without a doubt, the most powerful man in Westeros right now — and we didn’t even know it.

As for the man who was the most powerful, another revelation: the wealthy Lannisters are actually broke. Worse, they’re directly responsible for the crown’s debt to the now-scary Iron Bank. This is the direct equivalent of discovering Michael Bloomberg is broke. This may be why Tywin is so desperate to keep the family on the throne, but the Lannister winner today, surprisingly, proves to be Cersei, who attempts to save her family’s legacy by subtly appealing to the judges in Tyrion’s trial in the hopes that they’d find him guilty, removing his treason (and his head) to protect the family name, and not for the cause of her own personal advancement, which may explain why she succeeded this episode. 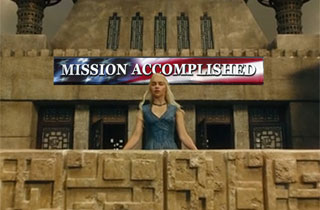 This also happens to be the episode where Danerys, safely ensconced in Meereen, learns that her crusade of freedom isn’t going so hot: Yunkai was retaken by the slavemasters who want to take revenge on Dany, and Astapor is in the hands of a guy who sounds an awful lot like Muammar Gaddafi. The lesson she takes away, despite all of her advisors saying she should just get to Westeros: hey, maybe she should stay and learn how to rule a city. You know, the city full of people who hate her because she publicly crucified the city’s upstanding citizens, the ones she would have needed to consolidate her rule. Whether you’re a student of political science or not, we can all agree that this sounds like a terrible idea.

WOMEN: For once, Cersei is doing everything right, winning the Grid with her ability to cede power to Margaery by dangling the Queenship in front of her and swaying Oberyn with their shared love for their daughters (likely genuine). The rest of the ladies, however, are making some serious mistakes: Margaery by being too obvious about her ambitions, Daenerys for believing she can easiliy impose a new world order on an ancient slave city using nothing but her superior weaponry and morals, and Lysa for marrying the guy who told her to start a war. Also, can Sansa ever catch a break?

FIGHTERS: Not much happens in the world of muscly men (and women) with big ol’ swords, except for poor little Arya getting some more romantic notions about swordfighting, taught to her by the “great Syrio Forel”, slapped out of her. “The greatest swordsman who ever lived killed by Meryn fucking Trant?” scoffs the Hound, adding that Trant won because he “wore armor and carried a big fucking sword.”

With that criteria in mind:

THE NORTH: The power struggles in the North have always been less about politics and more about survival, which means power comes from raw leadership ability combined with the will to be ruthless — until, of course, someone stronger comes around. Craster’s Keep is the perfect metaphor for this: Craster held power over his daughter-wives until the bigger, stronger mutineers from the Wall came around and killed him; and in this episode, the stronger, more disciplined men of the Night’s Watch kill them all in return.

Or an even better metaphor: Poor crippled Bran is taken by the stronger Locke, until he wargs into Hodor’s mind, and using the super-strong simpleton, snaps Locke’s neck. The North is Darwinian.

(And then the rape keep is burned to the ground, YAY!)

HOUSES: Everyone is acting in their own interests this week, with the possible exception of Cersei on behalf of House Lannister — but no one gets any advantages, except for Lysa Arryn, who’s getting laid for the first time in maybe decades.

See you next week for the Game of Thrones Pizza Party, hosted by the Breaker of Pizza Chains.