Game of Thrones Review: The Dragons Are Totally Neocons 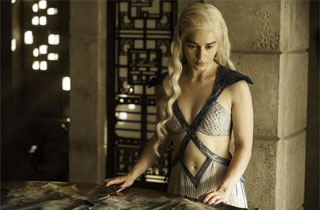 Here’s how we do things: each week, we’ll review how well the players did in each episode, and rank our top five in each category (Politicians, Fighters, Women, and The North). Obviously, there are massive spoilers in each review, so be very, very careful. And for you book readers, please don’t skip ahead and ruin things for everyone in the comments, or we’ll make you do fly through the Moon Door.

It’s an exciting series when a “tablesetting” episode — maneuvering all the players into positions where Shit Goes Down — involves a shocking murder, a controversially creepy kiss, and a giant man killing people for funsies. Even better: the sexiest new character ends up a deus ex machina for Tyrion Lannister, who, as we learn from said deuz ex machina, hasn’t caught a break in this world since he was a baby.

FIGHTERS: “I only have two talents in this world,” Daario tells Daenerys. “War, and women.”

It’s a perfect summary of how many of those who wield the sword operate, and how they make their decisions throughout the episode. Daario is the most obvious example, and his gamesmanship gets him exactly what he wants (a war campaign, and a night with the queen). But then there’s Bronn, who trades his friendship with Tyrion for a woman and a castle; Jaime, whose loss of a swordhand and and his relationship with Cersei has completely destroyed his confidence; and Oberyn, who steps up as Tyrion’s champion to avenge the brutal rape and murder of his sister at the hands of the Mountain.

On the flip side, it’s much more convenient to be nothing but a warmonger, as both of the Cleganes so murdering-ly demonstrate. But while the Mountain seems content to hack people to death and act as the tool of the powerful, Sandor and his recollection of how he got his facial scar — brutally burned by his own brother as a child — gives him a perspective of what it’s like to be a victim, and what it’s like to experience mortal fear. In a world where brute strength is the quickest way to show someone what’s up, the Mountain wins — unless Oberyn plans to bring him down with a feat of cunning.

POLITICIANS: We’ve known that Littlefinger’s used Lysa to maneuver himself from a country boy into the Lord Protector of the Vale, and that he’s quite comfortable using murder to get there. Was it really surprising that he’d push Lysa through the Moon Door once she already fulfilled her purpose? And — let’s get a little tinfoil hat here — do you think he kissed Sansa on purpose, just to drive Lysa further into madness? (It did have the added Petyr benefit of macking on his crush’s hot daughter, which, still, ew.)

Regardless, with that shove, Petyr now controls one of the greatest regions of Westeros, placing him squarely on top of the Political power grid. (On the very, very bottom: bratty Robin Arryn, who doesn’t realize that Moon Doors aren’t the answer to everything.)

In Meereen, Dany is finally talked down from her rampage of justice by Jorah, but not before flexing her power through some psychological sex games with Daario. But before Jorah convinces her not to kill all the Masters of Yunkai, he’s treated to a speech where she lays out all the injustices of slavery, and how she plans to present her new tactic of mercy to the Yunkai: “They can live in my new world or they can die in their old one.” Old-school, nation-building neoconservatism, but with dragons? Yeah, definitely.

Following them: Melisandre, who completely admits that most of her displays of Magical Fire Power are partially tricks and chemical illusions to draw people to her faith; Cersei, whose presence is unseen but felt with the removal of Tyrion’s friends and potential champions; and Tyrion himself, who may be desperate but at least had friends.

THE NORTH: Nothing particularly happens up here this episode, except to remind everyone that 1) the Night’s Watch is about to be attacked by wildlings, and 2) people aren’t taking that seriously. But remember that this happened.

WOMEN: This episode saw the Return Of Female Sexuality Being Used As Pawns to Broker Power. And, like most of the exercises of power this episode, it tends to be pretty blatant: the foremost Woman Sex Power winner happens to be Melisandre, whose dialogue with Selyse is a callback to the time where the Red Priestess seduced her husband to conceive a shadow assassin used to kill a king. “No act is sinful if done in service to the Lord,” Selyse attempts to convince herself.

In other worlds, Daenerys, echoing her character arc all the way from Season One, uses her sexuality to keep the Second Sons and Daario in line. And Sansa’s slowly growing aware that her beauty, virginity, and composure is the one thing keeping her alive — and, frankly, I can see her learning how to use that to control Littlefinger.

Problematically, Cersei also exercises sexuality to control someone: she gets Bronn to step down as Tyrion’s champion by making him a lord, arranging a marriage to the “dim-witted” second daughter of a prominent house. In the books, it’s heavily implied that Lollys Stokeworth might have Down’s Syndrome, making her consent to the marriage somewhat difficult, but it’s enough for Bronn to abandon Tyrion. “The North is far and cold, and Lollys is warm and close,” he sighs. Essentially, Cersei pimps out someone in order to get ahead.

Next week is Memorial Day, which means 1) no Game of Thrones recaps, and 2) everyone is going to be wandering around on vacation, much like Pod and Brienne did in this episode. Ciao, folks.