Game of Thrones Review: The Power Vacuum, Or, In Which Joffrey Watches His Parents Do It 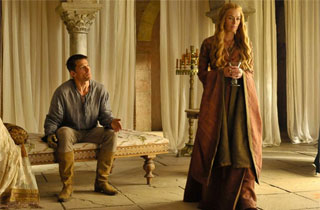 WARNING: SPOILERS BELOW. PROCEED WITH CAUTION.

Given how jam-packed the past two episodes were (JOFFREY!), this was a slow episode in comparison, full of players moving from Point A to Point B. Nevertheless, it allowed the characters to develop more, giving us a glimpse into how they view power — both in acquiring it, wielding it, and reacting to it.

HOUSES: Lannister. Except that power is concentrated absolutely in the hands of Tywin, as we’ll get into in more depth later. Importantly, though, Tywin acknowledges that he absolutely needs the help of his fellow houses, securing an actual alliance with the Martells of Dorne and (implicitly) ensuring that he maintains a good relationship with the Tyrells, likely by marrying Tommen to Margaery. (She is never gonna get laid in this show, is she?)

But securing alliances with your enemies isn’t the same as being the supreme ruler, and for the first time in this show, Tywin recognizes that Westeros is in serious shit:

The King is dead. The Greyjoys are in open rebellion. A Wildling army marches on the Wall, and in the East, the Targaryen girl has three dragons. Before long, she will turn her eyes towards Westeros.

That’s right: nearly an entire season later, he accepts that the Targaryen Girl and her dragons and her freakin’ empire-building scheme and her psychological warfare is a legitimate threat to his kingdom, and he’s taking the proper steps to ensure that Westeros survives the onslaught from all sides.

Meanwhile, while poor Stannis Baratheon seems to be at the very bottom, unimportant enough to be named in Tywin’s list of threats, Ser Davos will likely save his cause by appealing Stannis’s case to the Iron Bank of Braavos — a little-seen entity, akin to the International Monetary Fund, that been mentioned multiple times in the series. In the books, the Bank loans money to kingdoms, but has no problem loaning money to rebels and invaders should the kingdom fail to pay back their loans — something that, apparently, Westeros has a problem with lately (to the tune of 3 million gold dragons). Their motto is “The Iron Bank Will Have Its Due,” but it should also probably be “No One Is Too Big To Fail.”

POLITICIANS: This episode could basically be called “Tywin’s Rules on Ruling,” beginning with his first Socratic dialogue to the new King, Joffrey’s little round-faced brother Tommen, on the qualities that make a good leader. Conversely, he gave Tommen that masterclass while standing over the dead body of his brother, in a way that slapped Cersei in the face for raising a terrible son and a terrible king. If Joffrey had been a good ruler and known when to listen to his advisors, make alliances, and exercised restraint, Tywin mused, “perhaps he’d still be alive.”

And indeed Tywin, the de facto ruler of Westeros, does all those things throughout the episode — partly so he can ensure Tommen doesn’t make Joffrey’s mistakes, but partly so he can ensure that the Lannisters are remembered for their ability to govern, rather than twincestuous brats who have sex in front of their son’s dead corpse. (It’s gross and indicative of poor psychological coping mechanisms!)

The episode could also be called “How Daenerys Targaryen Manages to Strike Fear into An Entire City Without Using Dragons,” in which she leans on her fearsome reputation as a liberator of slaves to psychologically mess with an entire city. (Also, utilizing some convenient pissing contests). Slave rebellion + dragons + finest infantry in the world = Meereen is probably going to fall to her in about an episode and a half.

Following close behind: Littlefinger, who is actually the man behind Joffrey’s murder (bye, Dontos), and ostensibly has some motivation besides wanting to creep on Sansa. (He certainly had plenty of opportunities to creep on Sansa in King’s Landing without having to murder a king.) Olenna, for checking her ambitious granddaughter’s tantrum about not being Queen. And Davos, who may not be literate, but sure knows how to ally with rich people when it’s necessary. Tyrion, usually high on this list, is reduced to sending away his most loyal servants in order to protect them.

WOMEN: While Daenerys spends the episode liberating cities, the rest of the women in Westeros are reeling from the effects of Joffrey’s death and, more importantly, their own loss of power. Cersei no longer can use her son as a (psychotic) puppet, Margaery is no longer queen, Arya’s realizing that a Joffrey-less Hound is growing uncontrollable, Sansa’s been yanked into a plot that implies she murdered Joffrey, and Olenna, the only woman who can bear power without dragons, is probably wheeling behind the scenes to maintain her own family’s survival. (If you follow internet detectives at all, there’s strong evidence that she’s in cahoots with Littlefinger and may have murdered Joffrey.)

In fact, as Todd VanDerWerff speculates over at AV Club, Daenerys is the only woman empowered enough to make her own destiny, and that’s because she raised three dragons as her kids:

The argument seems clear: In a patriarchal monarchy like Westeros’, women are inevitably reduced to bargaining chips, and when you’re a bargaining chip, there’s little to stop men from treating you like property. It’s no wonder, then, that the two women we see with the most freedom are those who’ve realized the system needs to be leveled and replaced with something else. (Arya’s on her way to that, too.)

FIGHTERS: And if the women of Westeros are reeling in the power vacuum, the muscle of Westeros are grasping for survival and thoughtlessly crushing people’s lives along the way. Frankly, we’re shocked that Sandor Clegane didn’t murder the pious farmer and his daughter and instead left them to die, but claiming that they wouldn’t have survived the winter is still pretty harsh. Even harsher: a distraught Jaime forcing his sister into non-consensual sex, next to the corpse of his dead nephew/son, attempting to have some semblance of control. (There’s a lot of debate as to whether this is consistent with his character, and in my opinion, it’s a yes. Jaime may be developing a soul, and he may leap into bear pits to save his friends, but when it comes to anything involving being with his sister, morality seems to leap out the window. “I murdered people to be with you,” he told her in the first episode of the season — implying that he’s still the same man who pushed a kid out of a window in order to continue doing Cersei.)

THE NORTH: It’s pretty simple at this point: giant Wildling army threatens to overwhelm the under-armed Night’s Watch, all of the smallfolk get brutally murdered, and the lone innocent at Castle Black is shipped to a whorehouse for her own “safety”. But at least it gives Jon Snow a chance to step up as a leader, and his ex-girlfriend, Ygritte, a chance to kill him! Yeah, the world outside of King’s Landing is grim and brutal, even moreso near the Wall, and at the moment, everything is up in the air.

(We’d like to point out that the one blatantly pleasant scene ended up with a group of cannibal Wildlings murdering an entire village, sparing one boy who knows his mom and dad are about to be eaten. Hope that was violent enough for you.)

Props to Arya Stark for being clever and witty and a big ol’ fan of rabbit stew.