Game of Thrones Review: The Things We Do for Love 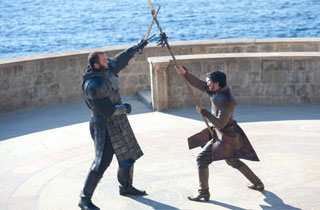 Welcome to the most Mediaite-ish way of reviewing a television series, ever: the Westeros Power Grid, in which we analyze and rank the players in each episode of Game of Thrones according to how well they play politics. For the world of Game of Thrones is, if nothing else, much like the world of politics and media in which we cover: groups jostling for power, individuals rising and falling, and factions overthrowing their enemies. There’s just more blood and nudity.

Today’s headline is based on the line uttered by Jamie Lannister in the pilot episode, the one right before he pushed Bran out the window, that illustrated how desperately brutal the world of Westeros can be — in that his action, done to protect the woman he loved, sparked an entire war. Love exists in Game of Thrones, but it creates a gaping weak spot that eventually destroys the warriors, out to defend the women they love, in this episode. And in one case, a man’s love leaves him open to manipulation by someone we didn’t expect to do so.

Due to the thematic arc for “The Mountain and The Viper” (whooooaaa thematic arc whooooa), we’re only going to focus on Warriors and Women this episode.

WARRIORS: The loser of the week, fatally: the passionate Oberyn, whose overwhelming thirst for vengeance and justice for his dead sister gets his head exploded like a watermelon.

The worst part is, Oberyn could have won if he’d simply been satisfied with the Mountain’s death, but instead he took at least twenty seconds to extract a confession for the rape and murder of his sister and children. (I can’t help but think what Bronn said last episode: “Maybe I could take him. Dance around until he’s so tired of hacking at me he drops his sword, get him off his feet somehow… but one misstep, and I’m dead.” Hello foreshadowing, good to see you again.)

Should we take away from this, then, that the Mountain and his simple desire to beat the life out of people is the most simple way to live and die by the sword in Westeros? Everyone who’s fought for an ideal — honor, love, duty, vengeance — gets that ideal turned against them. Jorah’s past desire to go home gets him exiled by a Daenerys when she learns he spied on her; Sandor’s strangely twisted desire to protect the child Arya– even for money, and even by forcing the brutalities of the world in her face — has left him with nothing to live for, once he learns that Lysa Arryn is dead. (The eunuch general Grey Worm, whom I’m really digging as a fully fleshed-out character, doesn’t show up in the rankings this week, but his palpable sadness for being unable to express his love for Missandei underscores the inextricable link between warring and passion.)

At the very least, it makes the Mountain’s motivations simpler, though as we’ve seen before, simple goals can still kill people, too. Look at all those dead trusting peasants — or, in this episode, those homesick Ironborn in Moat Cailin. At least Ramsay Snow (now Bolton) got what he wanted from his father: acceptance, and legitimacy. But he didn’t win his father’s love due to his infamous psychopathy — it was because he displayed cunning, a beloved Bolton trait, in taking Moat Cailin. (And also psychopathy.)

WOMEN: As for the women these men are chasing…well, some of them succeed and some of them don’t. The most stunning (and successful) move of game was Sansa’s decision to manipulate the Lords of the Vale into trusting Petyr, one that underscored a realization: Littlefinger may hold the most power in Westeros, but she has the most power over Littlefinger. He’s simply the vehicle she needs to ensure her own safety, and as long as she remains his puppetmaster (and portrays herself as a sniveling little girl,) she’ll survive.

But right now, she’s only capable of treading water via Petyr — Daenerys still has her kingdom to rule, and enough trusted advisors around her (we hope) to survive the loss of Jorah. Cersei will get her brother’s head, as she’s always wanted. Ygritte, who doesn’t care at all about Westeros Societal Norms, still gets to roam the North on the worst post-breakup rampage ever since Carrie. And Arya? Unless Sansa Stark hears that an Arya Stark visited the Bloody Gate, she’s essentially a psyche-shattered nobody.

Next week: War in the north! Mountains in the South! Tyrion and Jaime pretending to squash beetles in a dungeon!